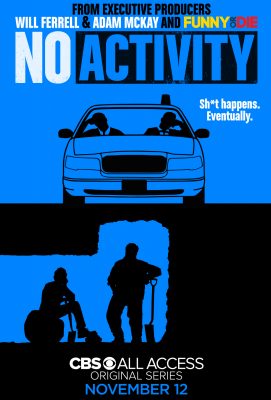 CBS All Access’ new series, No Activity, follows two low-level cops who have spent far too much time in a car together; two criminals who are largely kept in the dark; two dispatch workers who haven’t really clicked; and two Mexican tunnelers who are in way too small a space considering they’ve only just met.

The series stars Patrick Bramhall and Tim Meadows as the least competent cops since Car 54 Where Are You? – and premieres on Sunday, November 12th.

October 30, 2017 – CBS All Access, the CBS Television Network’s digital subscription video on-demand and live streaming service, today revealed the official NSFW red band trailer and key art for its first original comedy series, NO ACTIVITY. The series will premiere on Sunday, Nov. 12, in conjunction with the chapter one conclusion of STAR TREK: DISCOVERY. The first season of NO ACTIVITY will feature eight episodes with new episodes available weekly on Sundays exclusively for CBS All Access subscribers.

From executive producers Will Ferrell, Adam McKay and Funny Or Die, NO ACTIVITY celebrates the mundane in what should be a high stakes sting operation. Set against the world of a major drug cartel bust, the series follows two low-level cops who have spent far too much time in a car together; two criminals who are largely kept in the dark; two dispatch workers who haven’t really clicked; and two Mexican tunnelers who are in way too small a space considering they’ve only just met.