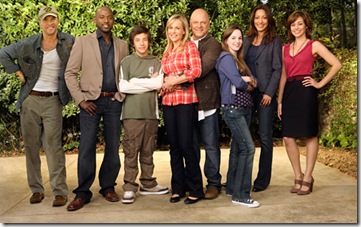 To paraphrase Jim Powell [Michael Chiklis], the members of the Powell family may reside under the same roof, but they love in separate worlds. Jim splits his time between being a part-time police sketch artist and househusband; Stephanie [Julie Benz] is a research scientist whose hopes of being a perfect spouse and mother run aground on the demands of her job; Daphne [Kay Panabaker] is on the school basketball team and trying to keep her folks for knowing all about her – she accuses her mom of “twitter-spying” on her, and J.J. [Jimmy Bennett] has a learning disability that is threatening to get him placed in remedial school. They haven’t done anything together as a family in three years – and the biggest memory generated by that vacation was poison ivy.

Thus, when Stephanie has to go to Brazil for her job, Jim insists the family go along. On the one occasion when he can pester everyone into doing the same thing at the same time – a sunset air tour of the Amazon – a storm comes out of nowhere and they crash into a tributary of the river. They emerge from the river and its glowing pod-like contents with amazing abilities and things Shift into hyperdrive [almost literally, for one of them].

The ep is narrated by Jim and Stephanie in what seems to be a documentary-like format, but the real situation is much more interesting – and is alluded to at least once during the premiere. 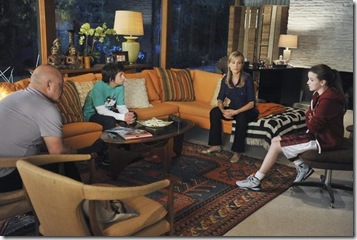 We learn that each of the Powells has received an ability that somehow relates to their lives. Thus Jim, who feels powerless in his life, becomes something approaching the Superman of the earliest issues [super strong, super swift reflexes, nearly invulnerable and able to leap a quarter mile in a single bound]; Stephanie, who always seems to be falling behind in one area of her life or another, gains super-speed; Daphne, who is having adolescent issues [fitting in; know what to say to be cool; boys] can suddenly read minds, and J.J., whose learning disability has him thoroughly depressed, becomes a veritable perambulating Stephen Hawking.

There’s no “with great power comes great responsibility” speeches – not all of the family are even glad to have gained these new abilities – but we get to see Jim and Stephanie explore their abilities with confidantes – Jim’s friend [and DA] George St. Cloud [Romany Falco] gets past a fainting spell [you’d faint, too, in those circumstances] to become Jim’s coach and supporter; Stephanie’s colleague, Katie Andrews [Autumn Reeser] helps her explore her abilities [and comes up with an explanation for why Stephanie’s clothes aren’t burnt away by friction…].

There’s even an opportunity for Jim to fight crime – though it doesn’t work out quite the way that he might have expected. There’s also a really unexpected tag that suggests big developments to come.

The No Ordinary Family premiere was written by series creators Greg Berlanti and Jon Harmon Feldman. It’s a fast paced hour that manages to juggle several arcs [one for each of the individual Powells – and combinations of the family members] without coming off as either too much material stuff into too little time, or just a huge info drop. David Semel directs with an eye on characters and a foot on the gas.

Most of the character development goes to Jim and Stephanie, but that makes sense, since they’re the parents and have the most obviously cool powers. Daphne and J.J. are set up in broad strokes, but their characters will undoubtedly be given more time to grow in future eps.

No Ordinary Family is really, really entertaining and, between the day-to-day lives of the family and the arc suggested by the episode’s tag, I think it’s safe to say that the show will be a genuinely fun ride.