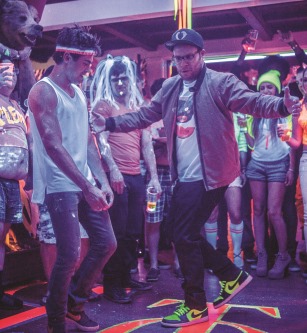 Back in 1978, National Lampoon’s Animal House introduced the crude-with-a-heart frat house comedy. Since then no one has done it better, but with Neighbors, there’s a new wrinkle that comes very, very close: college fraternity versus the previous generation. It features – among other things – career performances from Seth Rogan, Rose Byrne and Zac Efron.

Mac and Kelly Radner (Rogen and Byrne) have barely settled into their new home in a nice district, with their baby, when the Delta Psi fraternity moves into the house next door. Not wanting to appear uncool, but also wanting their daughter to be able to sleep at night, the couple welcomes the frat with a joint and a request to keep the volume down as much as possible. In return, Frat president Teddy Sanders (Zac Ephron) asks them to promise to come to him if they need the volume turned down, rather than call the cops.

The first time there’s a party, Mac and Kelly do just that and the frat boys comply – inviting the couple in and leading to a wild, but quieter time being had by all. The next time, however, Mac and Kelly aren’t able to get through to Ted and, after several phone calls, decide to call the cops. Which, of course, means war. 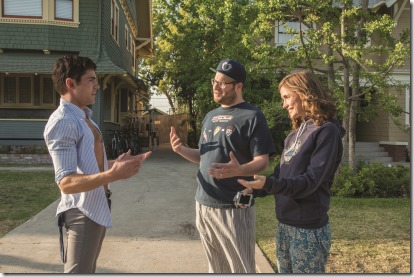 Nicholas Stuller (Forgetting Sarah Marshall) directs from a script by first-time feature writers Andrew J. Cohen and Brendan O’Brien and the result is pretty awesome. The escalating nasty pranks pulled – by both sides – are remarkably inventive and every is having a great time pushing the boundaries of bad taste in intriguing new directions.

What makes Neighbors fresh is that the battle of wits and diabolically clever gags is being waged by two equally inventive forces. Teddy is abetted by Delta Psi vice-president Pete (Dave Franco) and, while they are a force to be reckoned with, the not that much older Mac and Kelly are every bit as inventive and twisted. Not only that, but Kelly is no sidekick being dragged through this $#!+ – she’s an equal perpetrator and possibly even more vicious than the guys.

Though Neighbors is as crass, crude and otherwise demented as you might be expecting, it succeeds because – even as the pranks escalate – there is some serious soul here. 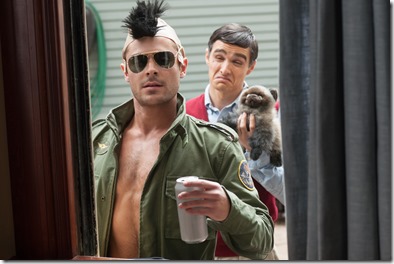 The Delta Psi guys want to take a place on The Wall – a display that honors the best partiers in the frat’s history; they want to be immortal/legendary because their time is just about over. Mac and Kelly, on the other hand, don’t want to think of themselves as ‘the old guys.’ They want to think they can be parents and homeowners without sacrificing their youthful immaturity.

The emotional center of the film is that neither side can really get what they want – at least not entirely – but they refuse to go quietly into that good night. The fight to avoid impending maturity sparks every frame of Neighbors – and every performance in it.

Rogan is a perfect choice to play Mac, as he can riff on past performances while going to new places; Byrne had to play it pretty straight in Bridesmaids so she’s a comedy revelation here, and Ephron gets to poke fun at his past performances and his recent troubles while showing considerably more range than we’ve seen from him before. Add in Franco’s gift for timing (and a killer Denison-circa-Fokker’s impression), and support from a massive cast that included Christopher Mintz-Plisse (Kick-Ass, Super bad), Carla Gallo (Bones) and Lisa Kudos, and the result is a party with heart.

Frankly, I haven’t laughed so hard, or so much, in years. Yes, even more than for This Is The End (which also included Seth Rogan and Evan Goldberg as producers – just saying’…).