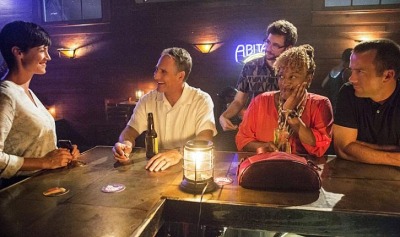 When someone Pride knows is murdered, it gets personal; meanwhile Brody needs a permanent address and LaSalle has a friend who might be able to help on the series premiere of NCIS: New Orleans (CBS, Tuesdays, 9/8C), Musician Heal Thyself.

The series debuts as a colorful, satisfying variation on a familiar theme.

When Chief Petty Officer Calvin Parks’ leg is found under a load of shrimp on a New Orleans dock, it brings NCIS Agents Dwayne ‘King’ Pride (Scott Bakula), Meredith Brodie (Zoe McLellan) and Christopher LaSalle (Lucas Black) into a case that could cause a gang war.

At first, the owner of the leg is unidentified – though it’s not long before Parks’ body is found (the series quickly establishes that the tiny New Orleans office has no problem asking for help when Pride gets the Coast Guard to help find it) and identified – with a fresh tattoo linking him to a gang called the DC Kings.

Pride refuses to believe that he’d gone back to the life and things get really interesting when Medical Examiner Dr. Loretta Wade (CCH Pounder) discovers something odd about the tat – and the discovery of cryptic files on Parks’ laptop further complicate things – even after Brody recognizes one of the numbers that appears repeatedly throughout.

The possibility of gang warfare is heightened by a drive by, which sets NO councilman Douglas Hamilton (Steven Weber) off on creating an anti-gang taskforce. In encounters between him and Pride, we see that the councilman is not Pride’s favorite person.

With the last season’s two-part embedded pilot on NCIS, we got to know the trio of NCIS Agents in the NO office, but Musician Heal Thyself shows that they’re still learning about themselves – as witness a discussion about tattoos and their locations, and LaSalle pointing out to Brody that her separation of personal and professional will not stand in this particular place. 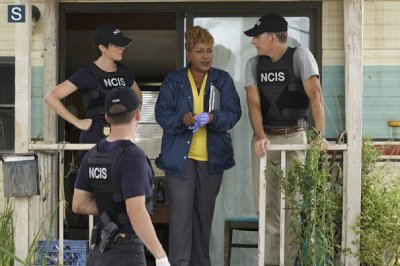 We also see, for the first (but definitely not last) time, Pride having to inform a parent – who’s also a close friend – about the death of his son. Playing into the premiere’s title, Parks’ father is jazz trumpeter Papa Parks (James McDaniels) and we get to see him playing in a small jazz club. Even, or maybe especially, in moments of sadness, the unique flavor of the city shines through.

Written by Jeffrey Lieber and directed by Michael Zinberg, NCIS: NO takes the usual beats of NCIS and transforms them into something unique and lovely. Even the show’s take on the interstitial ‘foomphs’ that are a franchise trademark have a look that screams Mardi Gras – take the black & white foomphs of NCIS and turn them into over-saturated color freeze frames and voila!

Like its parent series and fellow spin-off, NCIS: NO works, first and foremost, on its cast of characters. Already, we’re learning things about them – Pride is a killer pianist; Brody’s past work gives her unexpected familiarity with gangs; LaSalle has a relaxed practicality and desire to be helpful, Dr. Wade has a possibly darker sense of humor than Pride.

We also meet Dr. Wade’s associate, forensic scientist Sebastian Lund (Rob Kerkovich), who seems like a cross of the mothership’s Ducky and Jimmy Palmer (with the expertise of the former and social awkwardness of the latter). And speaking of the dapper Dr. Mallard (David McCallum), he makes a cameo appearance in consultation with Wade.

In its first standalone episode, NCIS: NO serves notice that it definitely belongs on CBS’ primetime schedule.