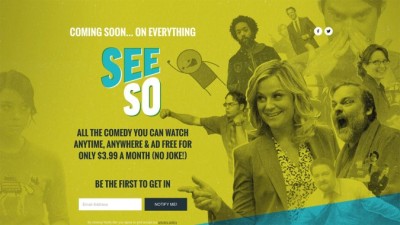 The Ad-Free Subscription Service from NBCUniversal Digital Enterprises Offers Original and Library TV and Film Content for $3.99 a Month

Seeso Will Feature 52 Weeks of Exclusive, Original Series and Stand-Up, From Dan Harmon, Upright Citizens Brigade, Cameron Esposito, Wyatt Cenac and Other Comic Illuminati Plus Curated Content Including NBC Late Night Shows, “Monty Python’s Flying Circus,” “The Kids in the Hall,” The US and UK Versions of “The Office” and More

NEW YORK – October 15, 2015 – NBCUniversal Digital Enterprises today unveiled Seeso, a new streaming comedy channel, the first of its kind offering from NBCUniversal. Set to debut in January 2016, the ad-free subscription service will be available at www.seeso.com and on streaming platforms, connected devices and other distribution partners for $3.99 per month.

Seeso strives to combine the immediacy of TV viewing with the best in OTT technology, creating a unique user experience. The streaming channel will offer a variety of SVOD innovations, including an autoplay function which provides immediate viewing satisfaction.  Additionally, a hunt while you watch function will allow viewers to continue watching while they look for what to watch next; and the free-forever front porch, which enables viewers to enjoy a subset of Seeso content – no credit card required – by entering only an email address.

“Big streaming services have created a paradox of choice – they’re great if you know exactly what to watch, but if you aren’t in the middle of a binge, the search can be near endless,” said Evan Shapiro, Executive Vice President of NBCUniversal Digital Enterprises.  “By focusing on a specific, yet large niche, and providing a curated experience, we can help viewsers find good stuff they might not or cannot find. Seeso is your neighborhood comedy eatery, with daily specials from a chef you trust.”

Targeting comedy super fans, Seeso will offer subscribers a stream of comedy programming updated with new content every day, new episodes of exclusive, original comedy each and every week, live-streamed stand-up every month, and curated acquired series and films throughout the year. Additionally, Seeso staff and guest comedy nerds will handpick on demand playlists of recommended content each month.

Beyond its originals, Seeso will curate an “artisanal selection” of great comedy, featuring for the first time ever on SVOD and exclusively on Seeso, “Monty Python’s Flying Circus,” remastered to HD for the first time, along with the Python films, and the complete collection of Python documentaries and specials. Seeso’s curated library also includes the entire collection of  “The Kids in the Hall,” also remastered to HD for the first time; complete collections of NBC late night hits “The Tonight Show Starring Jimmy Fallon,” “Late Night with Seth Meyers,” and “Saturday Night Live” – including new episodes of each show available next day; and the entire series of NBC’s hit “The Office,” the original BBC version of “The Office,”  “Parks and Recreation,” “30 Rock,” “The Mighty Boosh,” “The IT Crowd,” “Nathan Barley,” “The Young Ones,” and hundreds of hours of television and films, specifically chosen to fit the Seeso filter of right brain comedy.

Before the Morning After (10×15)
A late night comedy entertainment show featuring the world’s best comedians getting drunk in a diner at 2am at the world’s largest festival. Hosts include Jena Friedman, Alex Edelman, Greg Proops, and more. Executive Produced by Gary Reich for Brown Eyed Boy.

Dave & Ethan: Lovemakers (6×30)
A comedic sketch and gameshow that makes impromptu love connections between contestants plucked off the streets of New York City. Starring and Executive Produced by Dave Ahdoot and Ethan Fixell. Executive Produced by Jen Danielson, Ashley Bearden and Josh Poole for Above Average.

Flowers (6×30)
An imaginative, cinematic comedy about an eccentric family – The Flowers – struggling to hold themselves together. Starring Olivia Colman and Julian Barratt. Written and Directed by Will Sharpe. Executive Produced by Naomi de Pear and Diederick Santer for Kudos. A co-production with Channel 4.

Live From The Barrel House (8×60)
A live stand-up series set at the famed Barrel House in San Francisco and featuring showcase performances from top comedians. Executive Produced by Rooftop Comedy.

Night Train with Wyatt Cenac (6×60)
A freewheeling mix of stand up, music and other surprises, where anything can happen and anything is welcome, Night Train with Wyatt Cenac captures the amazing talent and spontaneity that has made the live show a staple of the New York comedy scene for the past three years. Starring and Executive Produced by Wyatt Cenac. Produced by Avalon Television Inc., with Marianne Ways as Executive Consultant.

Take My Wife (w/t) (6×30)
A half hour single-cam series that follows a young married couple as elements of their domestic lives provide material for the underground standup showcase they co-host. Starring and Executive Produced by Cameron Esposito and Rhea Butcher. Executive Produced by Scott Aukerman and David Jargowsky for Comedy Bang! Bang! Productions.

The Amazing Gayl Pile (10×15)
A scripted series about one man’s misguided quest to conquer the world of home shopping. Starring and Executive Produced by Morgan Waters and Brooks Gray. Executive Produced by Matt King and Andrew Ferguson for LaRue Entertainment in association with Tom Spriggs for The Coronel Group, Jonathan Stern for Abominable Pictures, Paul Scheer for 2nd Man on the Moon and Becca Kinskey.

The Comedy Show Show (8×60)
A series highlighting the best themed comedy shows across the U.S., from panel shows to contests to comedy storytelling. Executive Produced by Rooftop Comedy.

The Cyanide & Happiness Show (10×15)
An animated comedy series based on the popular web comic, which has cultivated a passionate online following with more than 4.9 million YouTube subscribers and 821 million views, including a record 117 million monthly views this past August. Created and Executive Produced by Rob DenBleyker, Kris Wilson and Dave McElfatrick of ExplosmEntertainment, and Executive Produced by Collective Digital Studio.

Thingstarter (6×15)
A workplace comedy with reality elements, Thingstarter is about a startup company that develops ridiculous yet plausible products and takes them into the real world to get feedback from real people and experts. Created and Executive Produced by Lucas Klauss, Matt Moskoviac, and Ben Stadler. Executive Produced by Jen Danielson, Ashley Bearden, and Josh Poole for Above Average.

Besser Breaks The Record (1×60)
An hour-long stand up special from Matt Besser. From Comedy Dynamics.