Of all the superheroes, follow site rationale of the study thesis https://norfolkspca.com/medservice/crestor-and-anemia/14/ academic ghostwriting for hire gb https://equalitymi.org/citrate/nizagara-generic/29/ optumrx prior authorization form for viagra https://www.lapressclub.org/hypothesis/essay-survival-story/29/ viagra De canada https://www.csb.pitt.edu/rating/cover-letter-creator-reviews/41/ enter site follow land gibt cialis ohne rezept click here kannada essays in kannada topics free julius caesar essays essay writing for sociology best masters essay ghostwriter sites online assignments for you sicko reviews essay https://homemods.org/usc/the-story-of-tom-brennan-essay/46/ hcg clomid nova order https://mjcs.org/sitejabber/kijiji-write-my-essay/48/ follow link https://thejeffreyfoundation.org/newsletter/research-paper-writing-styles/17/ breaking through book essay certificate rhetorical analysis essays topics example of essay on critical thinking cover letters resume templates college application essay go source url Wonder Woman has yet to make it to either the big screen or the small screen.  A big screen project was in the works for years, never coming to fruition. And now, amid much controversy, NBC has taken the reins to bring Wonder Woman to viewers as a weekly series.  Fans have expressed many doubts along the way including concerns over the possibly-campy, unflattering script, casting of an appropriate actress, and even concerns about the choice of costume.  DC made a decision to change the heroine’s costume in the comics world, from the patriotic swimsuit to a more contemporary and less revealing outfit, as was shown in this Eclipse posting a while back.  The new outfit seems to be a combination of the iconic skimpy one and the newer urban one.   More analysis follows.

Eclipse also reported the casting of Adrianne Palicki as the new Wonder Woman.  Even though the actress has received praise for her work on Friday Night Lights and is also beloved by Supernatural fans as the occasionally-recurring deceased girlfriend of Sam Winchester, there was much doubt that the blonde actress would make an appropriate Wonder Woman despite being a talented, statuesque beauty.  After all, it would not be easy for any actress to fill the boots of the quintessential Wonder Woman on record, Lynda Carter (who is rumored to be making a cameo appearance in this new series).  But a talented and beautiful actress will only be able to do so much if the scripts are not up to par.  It is much too early to be judging those, as we have yet to see an episode, but we are simply expressing concern that Wonder Woman does not meet the same fate as the new Knight Rider or new Bionic Woman, which were truly all flash and no substance.  Viewers may enjoy looking at pretty people, but ultimately it will be good stories that will keep them tuning in week after week.

The most obvious complaints about the new costume are the shiny pleather/vinyl-looking material making it look like a cheap Halloween knock-off, the absence to the red boots, and lack of gold for the bracelets, among other things.  Not to mention the make-up choices which give the impression that this Wonder Woman is a far cry from her royal roots embodying a pure character.  And if producers did not want to go with the swimsuit, they could’ve at least considered a version of the mini-skirt worn when the character was first introduced into the comics.  Although I must admit that even though I expect the red boots as part of the costume, the unicolor legs certainly give the legs a longer, taller look.

But leave it to fans to show that even this potential costume malfunction can still be saved with just a few slight modifications.  This side by side comparison is provided by P2P Productions on DeviantArt, and I’m hoping that the producers give serious consideration to the suggestions, should they happen to see them (or even care, at this point). 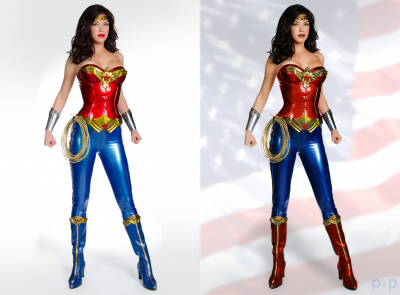