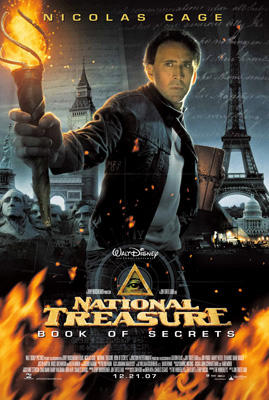 Just as Ben Gates’[Nicolas Cage]  great-grandfather, Thomas Gates, is about to be added to a prestigious university’s hall of American heroes, a man named Mitch Wilkerson [Ed Harris] announces he has a fragment of a lost page from Lincoln’s diary that Thomas Gates headed a conspiracy to kill Lincoln.

Naturally, we know, from a prologue, that Gates did no such thing – but Ben and his father, Patrick [Jon Voight] are only going by the story the were told by Patrick’s father. The only thing they say in defence of Thomas is that “Gate’s don‘t lie.” And, with that, the Gateses are of to prove Thomas’ innocence – armed only with a code that was faintly impressed on the back of the page fragment. 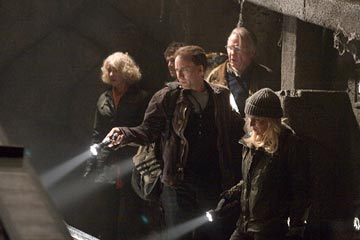 Before we know it, the Gates team [now included Justin Bartha’s Riley Poole and Diane Kruger’s Abigail Chase] have begun a search that takes them to the Parisian Statue of Liberty [one of three, in case you were wondering], Buckingham Palace, The Oval Office and Mount Rushmore. And, oh, yes, Ben Gates kidnaps the President of the United States [Bruce Greenwood]! It seems that there is a clue in The President’s Book [a mythical tome that contains the truth about Area 51, The JFK assassination and much, much more] – which can only be seen by the standing president.

One discovery along the way leads the team to require the translation of Olmec tablets. The expert? Ben’s mom, Dr. Emily Applegate [Helen Mirren]. Her translation leads the team on a hunt for the lost city of Cibola – the legendary City of Gold that originally sparked the flood of Spanish explorers to America. Despite her insistence that Cibola doesn’t exist, Applegate is drawn into the hunt because of Wilkerson [you’ll see why], and becomes part of the team.

The action is fast and furious – when the cast aren’t bogged down in exposition [in essence, half the film is the cast telling us the action, rather than the writers and director showing it to us – and the other half is the action they couldn’t turn into exposition]. When there’s action, it’s reasonably entertaining. A London car chase, though rather ineptly shot, has a kinetic energy that works; the idea of buzzing the French Statue of Liberty with a remote controlled toy helicopter is fun, and there are moments under Mount Rushmore that are spine tinglers. 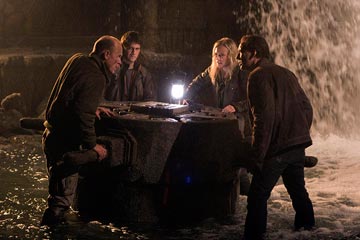 Unfortunately, beneath the one-liners and narrow escapes there is nothing special going on in terms of the main characters. The only real character stuff comes from Voight and Mirren, who are both a delight [the reason they broke up will definitely get you laughing!]. Even Harvey Keitel’s appearance as smarter-than-he-looks FBI Agent Sadusky [and Alicia Coppola’s as his partner, Agent Spellman] are simply there to ask the questions that the audience is asking – and nothing more.

It’s an odd combination, but National Treasure: Book of Secrets somehow manages to be simultaneously smart and stupid. If you’re looking for a lightweight, relatively fluffy movie to counter the wealth of heavier, award season films that proliferate this time of the year, then you’ll appreciate Book of Secrets for the same reason I did. It has no other purpose than to be a fun ride. Mostly, it manages that – if only just…