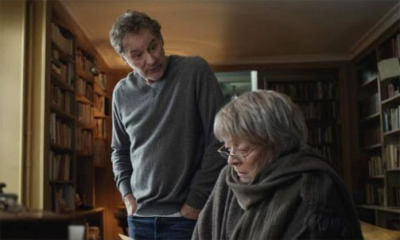 Mathias (Kevin Kline) is one pissed-off guy. His father could have left him millions, but instead, left him some classic French books – in French – and an apartment in the heart of Paris. When he arrives in Paris, after selling everything he owned to get there, he discovers that Mathilde (Maggie Smith) has a legal right to be living in the apartment – and that, as the new owner, he is required, by law, to pay her 2,400 Euros a month until she dies. This is not good news for Mathias, who is pretty much broke.

Mathilde graciously allows him to stay – in his own apartment – for a small rent, and the next morning he has possibly the most awkward introduction possible to Mathilde’s daughter Chloe (Kristin Scott Thomas).

Kline does a great job of building up Mathias as a loser – his disbelief at his situation gives us ample opportunity to see how desperate and pathetic he is and he stubbornly refuses to change. As we learn about his father – who left millions to charity because he didn’t think his son would use it well, and who had an expected tie to Mathilde – we come to believe that, for all his disdain, he was right about his son (especially when he starts selling furniture and trying to work around the viager…).

Smith is, as usual, brilliant as the intelligent, sharp and slightly sly, but (it turns out) naive Mathilde. She gives the appearance of one who does not suffer fools, but because of her link to his father, doesn’t boot Mathias to the curb.

Scott Thomas’ Chloe has, unlike Mathias, never married and been there for her mother all her life. When we learn that she is not as much unlike Mathias as she would like, it comes as a revelation.

Written and directed by Israel Horovitz, based on his play of the same name, My Old Lady never feels as stagey as could. The use of a marvelous set and a few offices and outdoor locations allow Horovitz to add space that feels complementary to the story’s intimacy, rather than in opposition to it. My Old Lady’s wit and humor are considerably more savage than expected, too.

The layers of the revelations that arise as the film progresses are such that the complexities of the characters and their situations never feel pedestrian, or forced. Indeed, Mathias and Chloe continue to be somewhat unlikable far longer than anyone would expect. It’s a tribute to Kline and Scott Thomas that we care about them at all – let alone throughout.

Almost right up to the end, I half expected My Old Lady to end darkly, but it pulls out of a metaphorical nosedive at the last possible moment – though it doesn’t quite guarantee the standard happily ever after. These characters are too damaged by life for that have been a satisfactory conclusion, but they do look like they’re on the track as the credits roll.