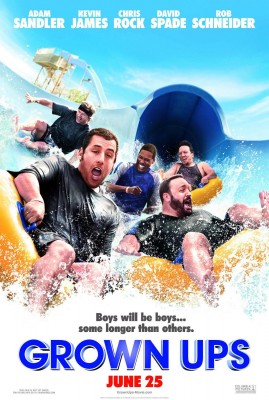 Despite protestations to the otherwise, 2010 provided a fair number of good, even great, films. Sadly, that meant there were still some real dogs to found – and I found some of them. In several instances, they were films I was seeing an invited critic, but several others where the result of being seduced by an enticing trailer, or clever TV ad spot. In one case, I was invited to the screening, but had already been locked into another screening that night. Overall, these films add up to approximately one day of life – and I want it back!

Watch out, Razzies, here we go…

10. Legion is a horror movie about the Heavenly Host of angels deciding that, since God is dead, they’re going to take over. They target a pregnant single mom-to-be – who carries a baby that might just save humanity – believing that, if they kill her, they’ll prove themselves worthy of doing that. Some nifty effects intermittently relieve long periods of boredom.

09. The Last Airbender: Book One: Water – faded palette [3-D can do that] – cutting out four-fifths of the story [which rendered characters  woefully underdeveloped] and being as obtuse about those characters’ development – is about priming a film to die before it’s even actually done. When fire looks like mud, you know you’re in trouble.

08.  Jonah Hex: They got the thing right – Hex is a morally ambiguous bounty hunter who’s stepped right out of the comic but the R-rated movie that was promised was turned into a different movie – by shooting a bunch of new scenes that were edited into the cuts taken from the original to make it more kid-friendly. The mess they created is not worth seeing by man or beast.

07. Robin Hood: yet another bloated, re-imagining of the legend. Only here, Robin and his men are dirty, determined and really, really boring. The tone of melancholy that surrounds every scene doesn’t exactly lighten things, much, either.

06. The Wolfman: Lately, horror filmmakers seem to think that all relentless, all the time is the way to go. For The Wolfman, this means that every scene we see is filmed with an eye to gloom, doom and despair – those being happy, uplifting emotions that can later be intensified for greater emotional impact. Even the transformation isn’t all that creepy.

05. Knight and Day. Tom Cruise and Cameron Diaz manage to make a spy spoof boring. And is it just me, or is Diaz slowly morphing into The Joker as we watch?

04. Clash of the Titans 3-D – Terrific cast; crap script; truly awful conversion to 3-D – the scenes with the Kraken were visually confusing and headache engendering.

03.Furry Vengeance – Good clean family fun about a guy who helps destroy forests to pave the way for new communities. The animals strike back. Brendan Fraser is good at this kind of comedy, but he’s not on his game; the script is awful, and the director had no idea how to salvage it.

02. I’m Still Here – Joaquin Phoenix and Casey Affleck attempt to use a year’s worth of Phoenix’s becoming a rapper as the subject of a mockumentary that is neither sufficiently mocking, nor strikingly original. It may be performance, but it ain’t art.

01. Grown Ups – When five men urinate in a public pool and the water turns blue there might have a problem. When that scene is the funniest thing in a trailer, it’s a neon sign saying, “DON’T SEE THIS MOVIE!!!” Director Dennis Dugan doesn’t seem to be interested in the guys’ hijinx – there’s no discernable plot; no indication of time passing, or much else. Adam Sandler usually goes for the lowest-common-denominator. Now he’s gone so far below it that lowest-common-denominator folks are finding his films mediocre.

Dishonorable mentions: How Do You Know – Reese Witherspoon single-handedly keeps this genre-mixing mess off the worst of the year list; Nightmare on Elm Street – really, this remake was boring – but not that boring; You Again – powerhouse female cast; feeble little movie – just not quite awful enough to warrant the worst of list [Victor Garber saves this one].