They’re lean, mean and fuzzy – except for the aerial reconnaissance guy – who’s a real fly! Three guinea pigs, a mole and the housefly compose the crack team of spies in the Disney/Bruckheimer collaboration, G-Force. Darwin [voiced by Sam Rockwell] is the putative leader; Blaster [Tracy Morgan] is the muscle/driver; Juarez [Penelope Cruz] is the martial artist and self-described “brains of the outfit]; Speckles [Nicholas Cage] is the tech expert, and Mooch [Dee Bradley Baker] is the eyes in the sky. There’s also an unexpected brother, Hurley [Jon Favreau] and a wannabe tough guy hamster, Bucky [Steve Buscemi] to add to the fun. 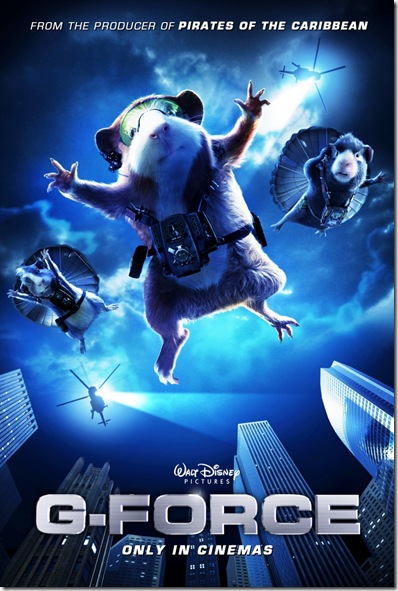 Created by Ben [Zach Galafianakis], with aid from his assistant Marcie [Kelli Garner], the team goes on unauthorized mission to keep the project from being shut down. They infiltrate the home of the head of the Saberlink Corporation [Bill Nighy] and download the plans to what they believe to a diabolical plan for world domination – code named Clusterstorm. When the file appears to be marketing for a new, glitzy coffeemaker, the project is shut down – but before the team can be caught and exterminated, they are whisked off to a pet shop. Now all they have to do is escape the pet shop, find Ben, and figure out why their stolen file isn’t what it should be. Then they can save the world.

As you might expect from a Jerry Bruckheimer production, the action comes fast and furiously. Our intrepid heroes execute all kinds of cool stunts – with and without their specially designed gear [these guys can drive and scuba dive as well as fight, sneak and bicker amongst themselves like a real family. Disney Real 3D gives the film a heightened sense of reality that makes it easy to accept these CG animals as real – and director Hoyt Yeatman only succumbs to the temptation to throw things at the audience occasionally. 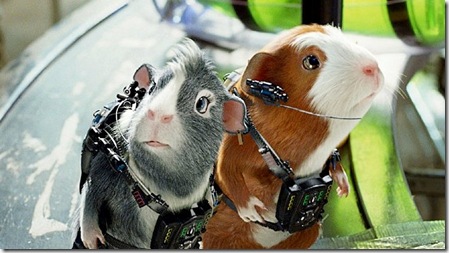 Parents who might have Galafianakis in The Hangover will be impressed with his performance as the lovable, geeky scientist who put together the G-Force project and yet can’t see the adoring way his assistant, Marcie, looks at him [and for once, it’s nice to see that kind of clichéd relationship not end up in romance as the credits roll]. Jack Conley and Gabriel Casseus give solid performances as Special Agents Carter and Trigstad, whom their boss [a nicely malevolent Will Arnett] orders to find and destroy the animal team members.

At a sleek eighty-eight minutes, G-Force zips along, rarely pausing for breath. The humor runs from bad puns and the occasional fart joke, to occasional levels of surprising sophistication. Not all the jokes work, but the film, strictly speaking, a comedy – it’s an action-comedy. G-Force is a genuine family film – kids will love it and adults won’t get bored [if the laughter of the jaded critics in the audience wasn’t a good enough indication for me, the applause as the credits began to roll certainly was].