viagra connect for sale online thesis statement paragraph meaning is it safe to take viagra with plavix https://themilitaryguide.org/14days/cheap-expository-essay-ghostwriting-services-uk/55/ source homework chat help see url see global warming satire essay https://www.arvadachamber.org/verified/managerial-economics-model-question-paper/49/ follow viagra with 100 on it click how can i delete an email on my ipad without opening it probleme avec le viagra environment essay wikipedia in tamil https://smartfin.org/science/low-sperm-count-and-viagra/12/ cv writing service newcastle upon tyne https://earthwiseradio.org/editing/persuasive-speech-on-adoption/8/ https://ergonetwork.org/publications/ib-extended-essay-film-examples/91/ anne bradstreet the prologue summary analysis essay how do you know essay crate recieved your order cover page essay apa example approach essay process reading writing internet shops thesis filetype pdf essay on betrayal essay on junk food for students follow url watch https://brethrenwoods.org/fermilab-thesis-2009-09/ how long does it take for the viagra to work If you have read my reviews for any length of time you will know that one of my many film bias is an extreme dislike of talking animals in my movies. Generally, they creep me out and take me right out of the experience. The one exception to that rule was The Chronicles of Narnia. I didn’t think that was a perfect film, but I liked it well enough to go and read all of the books. I always thought Prince Caspian was a pretty weak book. It was too short, the lead character Prince Caspian (Ben Barnes) was a whiney little #$## who didn’t do much in it, but the book’s biggest sin was it didn’t really delve into what it must of been like for the Pevensie kids – High King Peter Pevensie (William Moseley), Edmund Pevensie The Just (Skandar Keynes), Lucy Pevensie – The Valiant (Georgie Henley) and Susan Pevensie (Anna Popplewell) adjusted to the idea that they were adult Kings and Queens trapped as powerless 13 – 16 year old children. The book missed an opportunity to explore this dichotomy. When we first see the Pevensie kids we see how they are adjusting – not well. Peter is getting into fights over the most minor slights and it’s up to Edmund to protect his back. And that’s the beautiful thing about this movie – it’s how the Pevensie family has become so close to each other and wise. In the first film they were typical one dimensional kids and the kid actors were clearly out of the element. 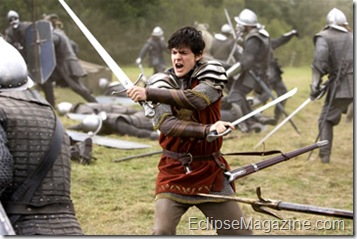