Spike Jonez’s Where the Wild Things Are does what was thought to be impossible: it turns a forty page book with barely ten sentences [fifty-nine words] into a lovely, scary, fun film. Maurice Sendak’s children’s book treats children as though they are intelligent, perceptive and enjoy a good scare. He doesn’t underestimate kids – and neither does Spike Jonez. 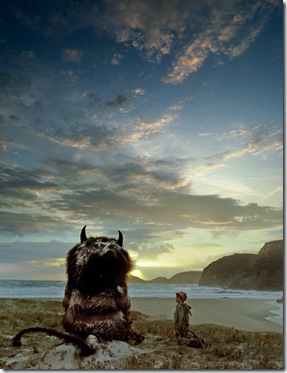 The story – Max gets sent to bed without dinner and imagines himself journeying to a land of fierce creatures who make him their king – is hardly one that should support a one hundred minute movie. Jonez, and co-writer Dave Eggers, make a few additions – mostly a brief look at Max’s life, where we see how even occasional moments of fun turn sour on him.

Max [Max Records] is a wild thing – as are all children, before most of them are turned into mild things as adults – even before he makes his epic journey. Instead of going to his room, as in the book, Max – in his wolf costume replete with wolf-eared hood, whiskers and tail – dashes out of the house and runs until he comes to the river, where a boat sits as if awaiting his arrival.

After he arrives in the strange land of the Wild Things, he persuades the gigantic creatures there that he’s a king and promises to always make them happy. All the creatures from the book are here – bodies by Henson’s Creature Shop and facial movements by CG – Carol [voiced by James Gandolfini], given to impulsive acts of destruction; Douglas [Chris Cooper], the eagle-like wise man of the group; Judith [Catherine O’Hara], the group’s pessimist; Ira [Forrest Whitaker], melancholy and laconic; K.W. [Lauren Ambrose], the rebellious one who has friends outside the group, and Alexander [Paul Dano], barely taller than Max, and to whom no one pays any attention.

Alas, just like in real life, his fun eventually turns sour – as though his imagination, as wild and unfettered as it is – can’t quite overcome his real life.

What makes Where the Wild Things work, for me at least, is that it’s not a parable or fable. Sendak’s book accepted that kids are kids – not mini-adults – and that they are wild and, for a time, untamed. They love adventure and a good scare. They grow at their own pace – no two alike. Jonez’s film does the same – there are no overt morals; Max doesn’t act out because his mom [Catherine Keener] has a new boyfriend [Mark Ruffalo]. No, Max is just a kid. A real kid with an untamed side and a big imagination.

Where the Wild Things Are is a good, occasionally scary film that captures Sendak’s attitude perfectly. It may be Jonez’s masterpiece. Let the wild rumpus begin, indeed!

9 thoughts on “MOVIE REVIEW: Where the Wild Things Are – Let the Wild Rumpus Begin!”