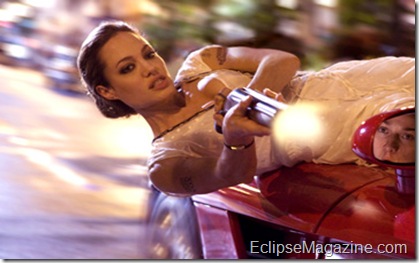 The summer of the Comic-book movie continues this weekend with the launch of Wanted an adaptation of Mark Miller’s over the top graphic novel about a wimp who gets turned into an amoral, masochistic Super Villain. I had never heard of this book until the movie was announced last year. So I saw the film cold. I walked out of the theater being mixed, on the one hand Russia action director Timur Bekmambetov channels his inner Woo to bring us some amazing action sequences on the other the acting is all over the place. No matter how much Hollywood wants it to be true, James McAvoy doesn’t have the “It” factor. He’s ok in small doses but he just lacks charisma. Last year Timur floored me with the amazing, over the top Day Watch – if you are an action fan, you must see this. But all the elements that made Day watch so amazing, don’t work in Wanted.

Maybe it’s because he’s trying too hard to be noticed here. Timur obviously wants this to be his calling card film and grab Hollywood by the balls and scream “Pay Attention to me!” The problem is he’s saddled with McAvoy and a bad story featuring a bunch of characters that not only do you not like, but actively HATE. This is where reading the comic book was a mistake. As I said, the film left me feeling ambivalent, reading the book made me want to shower. The book is that vile and disgusting. Like Timur, it’s Miller trying so desperately to be controversial. The problem is there’s no story just a bunch of panels with people saying fuck you, killing and raping everything in view. He’s not making the social statement that he thinks he is. He’s being a ten year old little boy who discovers the word fuck for the first time.

The Producers of Wanted wisely just kept the name, the characters and some of the attitude from the book for the film. Instead of trying to join a league of Super Villains, Wesley (McAvoy) is recruited by the hot and dangerous Fox (Angelina Jolie who is obviously enjoying herself in this) to take his father’s place in a Fraternity of Assassins lead by the enigmatic Sloan (Morgan Freeman).

The plot, what little there is, is used to showcase Timur. In Day Watch there is this eye popping moment where one of the female characters tears through Russia in this hot Red Viper doing some amazing things including driving straight up a building and crashing through the top floor. Incredible moment in the film, he repeats it in Wanted. Only this time it’s Jolie driving the Viper in a spectacular chase sequence. The problem is, I didn’t care about the characters or what was going on and I already watched this scene in Day Watch, so it lacked the wow factor. In the first half of the film there are several CGI cartoon shots of McAvoy in slow motion with his face jiggling all over the place. It was neat once, but by the 3rd time I was ready to see something else.

Wanted isn’t nearly as vile as the book and it’s certainly watchable, but it’s the first Comic Book film of the summer that fails to hit its mark.