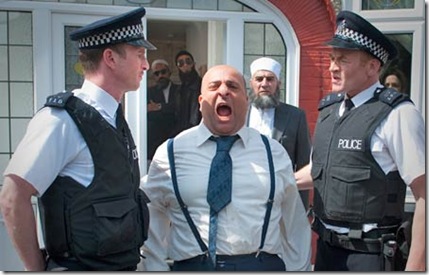 You know the expression Sunday Christian? Well, Mahmud Nasir [Omid Djalili] is the Muslim equivalent. He prays five times a day… mostly; he hardly ever swears… he says, and maybe, after a stressful day, a bit of pale ale may pass his lips. In his heart, though, he is a fervent Muslim with a good life – a beautiful wife, Saamiya [Archie Panjabi]; a son, Rashid [Amat Shah] upon whom he dotes, and a successful taxi business. The only real flaw in his life is a curmudgeonly rival cabbie named Lenny [Richard Schiff].

Them shortly after his mother’s death, while packing up her things, he discovers adoption papers. A brief, intensely impolite investigation later and he learns the horrible truth: he was born Solly Shimshilliwitz. By birth, he’s a Jew! Oy vey, ist mir!

Talk about an identity crisis!

Worse, the only person he can talk to about this is… wait for it… Lenny!

Lenny, it turns out, is the Jewish equivalent of a Sunday Christian, but he undertakes the task of teaching Mahmud what it means to be Jewish – focusing on the important stuff: how to dance like Topol in Fiddler on the Roof; the proper pronunciation of ‘oy’ and how to pass as Jewish at a bar mitzvah.

The complication to this simple story of self-discovery is Rashid’s girlfriend, Uzma [Soraya Radford]. Her mother is marrying radical Muslim leader, Arshad El Masri [Yigal Naor] and if he and Uzma are to be married, then El Masri will have to give his blessing.

And then there’s the music video of Mahmud’s favorite singer from the ‘80s, a Gary Neumann sound-alike called Gary Pace…

The Infidel takes satirical aim at all racial prejudice in general through the specifics of the Muslims and Jews, but its racial and political humor isn’t nearly as compelling as its individual characters and its more general humor. Indeed, the final intellectual/religious debate between Mahmud and El Masri takes a turn that, while immensely entertaining and satisfying, render the satire almost toothless.

While the whole cast is extremely good, Djalili, Schiff and Naor really give The Infidel zest.

Because David Baddiel’s script gives us interesting characters and just enough successful humor; and because director Josh Appignanesi knows when to punch a moment and when to let it reveal itself delicately, The Infidel may not be the savage satire they want it to be, but it is a thoroughly enjoyable film.