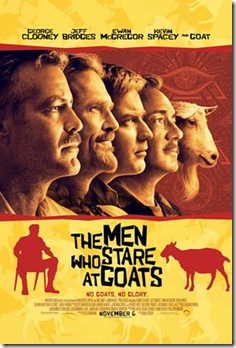 The flashbacks that give us the Jedi training plan –from Cassady’s perspective – give us a lovable mentor in Lt. Col. Bill Jango [Jeff Bridges]; a host of odd exercises; a serpent in Jango’s paranormal Garden of Eden in Larry Hoover [Kevin Spacey], and a dead goat [see film’s title], among other things.

Clooney plays Cassady perfectly straight except when he doesn’t – and we buy his carefully timed over-the-top moments because there’s a balance between those sides of his performance that balance out neatly. Bridges is mostly over-the-top, but in a way that suggests a more active Dude, so we have something to relate to there, as well.

It’s Spacey’s luxuriantly nasty performance as Hoover that balances out the goofy positivity of the rest of the film. When he congratulates a newly married comrade and his wife, he takes real pleasure in adding, “I’m sorry it doesn’t work out for you.”

Like the story he’s telling, Heslov’s direction tends to meander cheerfully along some intuitive course that is not necessarily like anything we’ve ever seen before – and yet, the film works on a level of farce because of it. It’s not just wacky; it’s wacked out.

Possibly, it’s because of the film’s meandering nature that The Men Who Stare At Goats doesn’t seem like a satire so much as a comedy that doesn’t mind taking a few shots at military intelligence, Blackwater, Halliburton, or whatever – if they should happen to come about. It’s that lackadaisical, meandering approach that makes the film work [though it might work even better with the aid of the pharmaceuticals used by Jango’s New World Army. Plus there’s the joy of watching Clooney’s Cassady tell McGregor’s Wilton he’s a Jedi Warrior. The irony is almost too much!

3 thoughts on “MOVIE REVIEW: The Men Who Stare At Goats Made Me Laugh!”