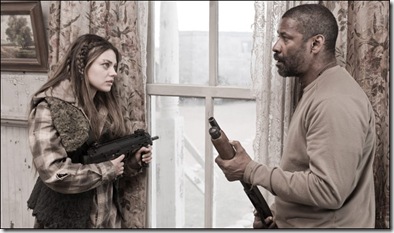 Much has been made of the The Book of Eli as a platform for Christian beliefs as its protagonist carries the last remaining Bible across America, headed west to… we don’t know what. What matters is what Eli [Denzel Washington] believes – and he believes that a voice, a voice as real as any he’s ever heard, told him where to find The Book and to take it west. That, in essence is the film’s plot – along with the obstacles that Eli finds in his path. These obstacles include a band cannibal killers who use a woman chained to a shopping cart as bait; an elderly couple who are full of surprises, and the mayor of a small town who rules with an iron hand.

Considering that The Book of Eli is the first film by The Hughes Brothers since From Hell, there might be any number of ways to look at the film – as a statement of belief; as an exploitation of belief as a device upon which to string a series of dark and vicious action set pieces, or as an exploration of faith and the ways any holy book can be used and abused as a source of power. In short, you can probably read into Eli anything that you want to read into Eli.

Eli believes himself to be on a mission from God, but we see him fight his better instincts to refrain from helping a woman who is raped and, probably eaten. The abovementioned mayor, Carnegie [Gary Oldman] is trying to restore civilization on his terms and believes The Book will give him the words to convince others to cede power to him without nearly as much violence.

When Eli visits Carnegie’s town, Carnegie tries to enlist him in his cause – going so far as to give him a private room, food, water and a beautiful young woman named Solara [Mila Kunis]. Eli doesn’t succumb to this temptations and leaves – even though his room is locked and guarded. As he walks down the road, Solara joins him, despite his bests to dissuade her. Carnegie and his men follow, and catch up to them as they are sharing tea with George [Michael Gambon] and Martha [Frances de la Tour]. 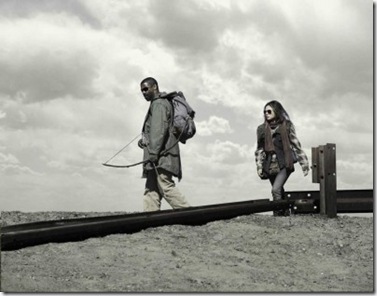 As one of the final scenes shows, The Book of Eli could just as easily have been the story of an Arab carrying the last copy of the Q’uran east. It is about faith and living in a certain manner – not necessarily a Christian manner [though that is the most resonant belief system for North Americans].

That this idea is being put forward in a post-apocalyptic world is compelling. As Eli notes, there are those who believe The Book was responsible for the apocalypse. Rather, it might be more likely that abuse of The Book [as by false prophets] lead to the current state of affairs.

The argument for this thought is in comparing Eli and Carnegie and their reasons for wanting the book: one to deliver it to people who will heed and spread its teachings; one who will subvert its teachings to gain personal power.

The Hughes Brothers have bleached the color out the film – something that has become a kind of cinematic shorthand for a post-apocalyptic world – but they’ve done in two different but complementary ways. When telling the story of Eli’s journey, the colors are browns and beiges that suggest both a certain warmth and strength of purpose; when looking at the world of Carnegie, the palette shifts more to greys and blues – when both are onscreen, the palette leans more to Eli’s colors giving us a slight but visceral feeling that Eli is the good guy.

In town, The Hughes Brothers also contrive to give us a feeling of claustrophobia – even in the scenes that show the interior of the town bar [the Orpheum, built in an old movie theater] – and one of agoraphobia-inducing distances that are filled with bleak vistas or roads filled with dead vehicles, their drivers still at the wheel.

The action sequences are hardcore for damage, but shot in a way that either removes the violence from us [as in the first sequence, shot in silhouette] or brings them eye-poppingly close [the death of the guard on whose watch Eli escapes]. Washington makes a solid action hero executing his economical, efficient moves with grace and a certain panache.

The Book of Eli is not an instant classic – it gets a little too invested in its themes – though a twist regarding The Book certainly reaches for the mythic and changes our perception of Eli. It is, however, a very solid, intelligent film – one that sets up a sequel in a unique and darkly comic manner.