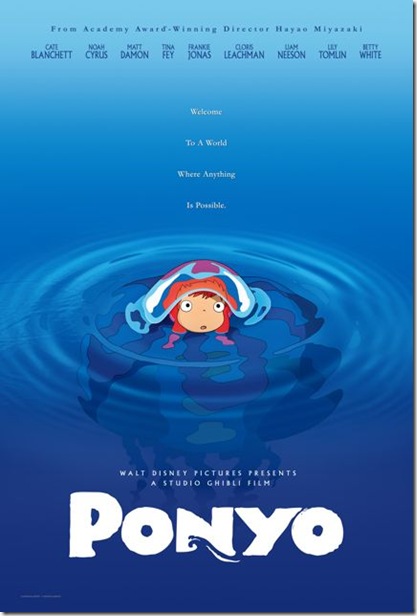 The worlds created by Japanese master animated filmmaker Hayao Miyazaki are wondrous places where a bus can be a giant cat; waves can be giant, fluid fish and goldfish can have human faces. They are worlds that can be as sophisticated as Citizen Kane, or as subtle as the gentlest child’s book. Ponyo, the first Miayzaki film to garner something approaching a wide release in North America, is a re-working of Hans Christian Anderson’s Little Mermaid – and is far truer to the spirit of tale than the Disneyfied movie.

The story revolves around a headstrong goldfish named Brunhilde [voiced by Noah Cyrus], who meets a five-year boy named Sosuke [Frankie Jonas] and falls in love with him when he takes her home with him in a bucket of water. He names her Ponyo – a name she immediately prefers to her own, and tries to feed her bits of bread from his ham sandwich – which leads to her discovery of ham [something that will further worry her father].

Thanks to the magic within her, Ponyo changes, becoming a real five-year old girl, something that puts the world out of balance – much to her father, Fujimoto’s [Liam Neeson] dismay. The film follows a number of characters – Lisa [Tina Fey], Sosuke’s mother; Koichi [Matt Damon], Sosuke’s father, who captains a cargo ship, Fukimoto and his former wife, a sea goddess named Gran Mammere [Cate Blanchett], and a trio of old women [Betty White, Lily Tomlin and Cloris Leachman], as well as Sosuke and Ponyo. 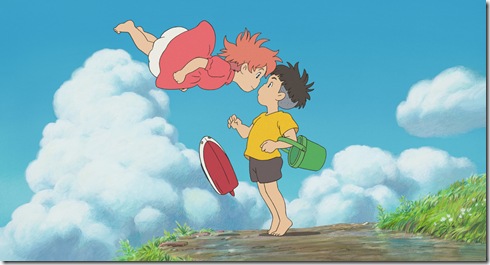 The story may be simple, but the visuals are extraordinary and the emotions true. Ponyo is among those few movies to suggest that the world can be saved from destruction without firing a shot or throwing a punch. It is almost certainly among the very few to recognize that a child can understand love and make a decision based on it – and probably the first in which the fate of a planet rides on such a decision.

Kudos must go to Melissa Mathison [ER: The Extraterrestrial], whose adaptation of the script not only had to provide dialogue that matched both the content and emotion of the original Japanese script, but had to fit the movement of the characters’ mouths. There can be differences in some case, but a Miyazaki film is so specific that nothing can be allowed that might take the audience out of the story, even for moment.

Ponyo is Miyazaki at his best. He doesn’t just use camera moves to draw the audience in; he also sharpens and softens details. Thus a forest seen from a good distance above is a mass of carefully blended pastels, while up close, it becomes detailed to the point of photographic sharpness – and the transition from one to the other is so smooth that we don’t even notice.

In its simplicity of story; trueness of emotion, and dreamlike world, Ponyo is a film that is genuinely special. It may not make the kind of narrative sense that we see in most films, but it makes sense in the worlds of Hayao Miyazaki, and those are worlds well worth exploring.