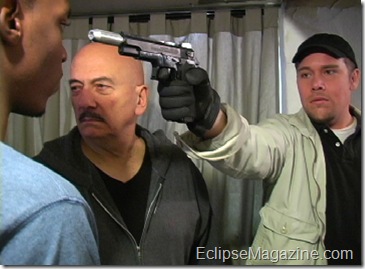 Local Baltimore Boy Jimmy Traynor is a machine. He’s a young director who manages to do a lot with very little. He’s the definition of an Independent Filmmaker who loves what he’s doing. He already has more than 10 movies to his name. His latest effort Live and Die was shot in 8 days using friend’s homes for locations. The movie was written, directed and has a cameo by Jimmy in it. The one thing that I’m noticing in his films is he knows Baltimore and really has the language and its people down.

He’s certainly put together a good cast for this, headed up by Tom Lyle who, if he doesn’t have an agent, needs to get one quick. He gives a strong performance as a guy – Lee Thomas, who is about as down on his luck as you can get. He gets fired from his 18 year factory job and immediately finds himself getting kicked out of his home because he missed rent by a few days. His life spirals out of control and somehow he ends up falling in love with a woman who turns out to be a professional assassin. Of course this can’t end up being good. Throughout it all Lee could end up becoming bitter and angry but Tom manages to find and maintain the Lee’s humanity. He’s just a guy whose regimented life becomes completely out of control. There’s a cute cameo with Jimmy in the beginning and towards the end of the movie where the big reveal happens.

Jimmy has formed his own little acting troupe of locals who has worked with him in the past including Tom Lyle who was in Jimmy’s last film The Ticket. As Jimmy said in an email he "impressed with his professionalism, as well as a lot of the bit players from "The Ticket". So, I decided to make a movie with them and make them all major players. Lil Rhee, Mark Kilbane, Beverly Shannon brought this film to life along with new added members who blew me away such as Frederick Cowie, who played "Jamie".  Frederick auditioned for a different movie I was working on but was so impressive I just had to add him into "Live and Die".  Two more impressive actors were Charlie Dreizen "Bobby" aka "Jamie’s younger brother and Carleen Troy "Tiffany".

if I had one complaint about it, it would be that it does look like it was shot on video and the movie goes a bit off the rails at the very end where there are about 10 or 15 different "twists" in the span of 5 minutes. It’d be really interesting to see what he could do with an actual budget. He makes do with what he has, Live and Die is a very competent production. But the expert use of lighting and storytelling makes you forgive that "flaw."   Check out Jimmy Traynor’s website for more information.