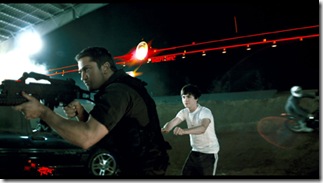 Set in a world where society as a whole is becoming overly infatuated with a game that allows people to take control of – or be controlled by – others in a game brashly entitled “Society” [think The Sims, but with real people – and experiencing what those people are actually feeling], Ken Castle [Michael C. Hall], the inventor of Society, has created a second game, Slayers, in which convicted killers are programmed [through the use of nanobots] to be taken over by game players and placed in a situation where it is literally kill or be killed. Any convict who survives thirty plays will be set free.

In the world of Slayers, Kastle [Gerard Butler] has won twenty-seven times. His player/puppet master is a seventeen-year old gamer named Simon [Logan Lerman]. Other important characters include Kastle’s wife, Angie [Amber Valletta], TV-tabloid show host Gina Parker Smith [Kyra Sedgwick] and the members of a subversive group of hackers who call themselves Humanz – and see Society and Slayers as but the first steps in a plan to bring the entire world under Castle’s control.

The game action is intense – Slayers is shot in the jittery style that made Crank such a rush, but Society scenes are more moderately paced and in psychedilically glowing colors, focusing on some of the people who are controlling/being controlled and glimpsing some of those who are playing the game from home [scary, scary stuff].

The Neveldine/Taylor team have been, right from the start, in complete control of the devices and techniques of film. Not only do they use every cinematic ploy available to them [pans, zooms, fades, jump cuts and so forth], they use them in a structured manner. These guys aren’t telling us how clever they are; they are taking us through the looking glass to show us what we are becoming – and it ain’t pretty! [Though it is entertaining – maybe too entertaining].

Gamer, then, is a satirical entertainment that is filtered through the sensibilities of two wildly divergent kinds of videogames taken through a bent but logical evolution. The characters involved are developed to various degrees – the Humanz are little more than plot devices, though Chris Bridges and Alison Lohman give them unexpected depth – but without solid performances, Gamer’s two main forces, Kable and Castle, would not hold the film together.

Butler may not have as much dialogue as Hall, but he’s very good at communicating with his eyes and gestures. Hall gets the better dialogue and really sells it – Castle is far more horrific than Hall’s day job, Dexter Morgan [the serial killer who kills serial killers on HBO’s series, Dexter]. Castle hides behind a good-ol’-boy facade, exaggerating his accent and lulling people into believing he’s amassed his fortune by actually giving a damn about them. By the time Kable finally confronts Castle, we know exactly who each one really is.

Gamer is tour-de-force filmmaking by a couple of guys who do things their own way and attack each project like it’s the end of the world. Now all we need is the Gamer videogame to come full circle.