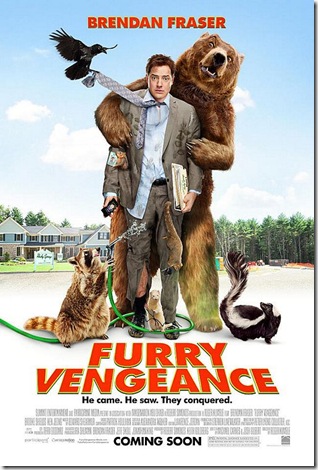 Furry Vengeance is an eco-fable with a concrete fist in an iron glove. The tale of a developer who moves his family from Chicago to an Oregon forest to build an idyllic housing development only to become the target of an angry Mother Nature has its heart in the right place but everything else is an utter failure.

Dan Sanders [Brendan Fraser] is the developer whose attempt to put a housing development in that Oregon area. He believes his company’s claim of eco-friendliness so much that he moves his family [wife Tammy, played by Brooke shields; son Tyler, played by Matt Prokop] to the location to live in the model home while the development is being built. Unfortunately, his boss, Neal Lyman [Ken Jeong] likes what he sees so much that he unveils plans for amounts to a small city that would destroy the forest. A clever raccoon discovers this well before Dan, who is completely unprepared for the ensuing revolution – and has no idea why he’s been targeted.

Subplots about Tammy getting roped into planning the annual Forest Festival and Tyler striking up a friendship/romance with pretty student librarian Amber [Skyler Samuels] are pretty much vague and unsatisfying, but are the closest the film comes to working.

The Dan vs. Nature aspect of the film comes across as wanting to be a live-action Roadrunner cartoon with the Rube Goldberg devices the animals use – in addition to their natural attack modes [skunks spraying; birds dropping poop on targets; a bear tossing a Dan-filled porta-potty into a treetop.

Of course, Brendan Fraser would seem to be the perfect guy to play a put upon, live-action Wiley Coyote – he’s done a lot of cartoonish roles in the past [including one of the Looney Tunes movies]. Sadly, the script doesn’t give him anything to work with, so he just seems to be flailing aimlessly. Unfortunately, Dan is the best written character in the film, so everyone else comes off even worse.

The biggest sign that the film is truly awful? Ken Jeong [Knocked Up, The Hangover] is not funny. When he’s not funny, the material has to be seriously unfunny.

If there’s any justice, Michael Carnes and Josh Gilbert [Mr. Woodcock] will never work in Hollywood again. Yeah, Furry Vengeance is that bad!