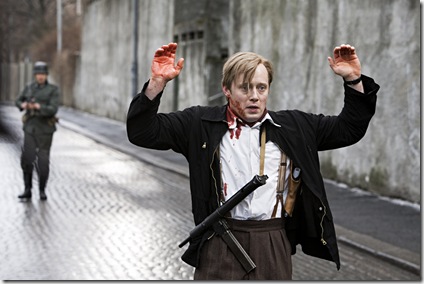 You’ve most likely never heard of Max Manus [Askel Hennie], but he was one of the most effective saboteurs of World War II. The eponymous Norwegian film concerns itself with detailing his exploits in a stark, straightforward manner.

After fighting communists in Finland, Manus returns to a Norway that has rolled over and become ruled by a Nazi puppet government – a fact that angers him so much that he decides to do something about it. Initially, that means publishing an anti-Nazi newspaper and planning to blow-up some significant Nazi target, but he and his friends are amateurs and caught out – leading to his first of two incredible escapes.

He makes his way to Scotland – via Sweden [the other neutral country] – where he learns to be a saboteur. He immediately puts his training to use, leading a team of saboteurs in a daring strike against Nazi ships – an act that brings him to the attention of Siegfried Fehmer, the commander of the Nazis in Norway. Through his best friend, Gregers Gram [Nicholai Cleve Broch], he meets Tikken [Agnes Kittelsen] and despite less than positive first impressions, forms a bond with her.

We only learn in a scene near the film’s end that Manus was not well educated – a fact that makes his achievements all the more heroic.

Max Manus, by first-time scriptwriter Thomas Nordseth Tiller and directed by Joachim Ronning and Espen Sandberg [who co-directed Bandidas], is a spare but elegantly shot film that feels utterly real – even without the blood and gore that seem to be de rigueur these days. Ronning and Sandberg have a feel for the kind of pacing that feels natural even though it isn’t, and get some fine performances from their cast.

Hennie is particularly good as the title character with his resemblance to the young Christopher Walken [lopsided smile and all…] and emotional range.

There have been some incredibly good films coming from the Scandinavian countries; films like Sweden’s Let the Right One In and The Girl with the Dragon Tattoo. While not as well known, Norway’s Max Manus is in that class of film.