Disney’s A Christmas Carol surprises in that not only is it a wonderful film, it doesn’t actually dress up the tradition Dickens tale with too much action movie fooferaw. 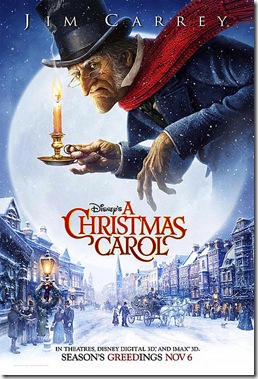 By now, what with everyone from Mr. Magoo to Tim Curry having played the humbugging Dickens miser, Ebenezer Scrooge, there are very few people who don’t know the story of how he is haunted by the ghosts of Christmas past, present and future and regains his lost humanity. The question is merely whether Robert Zemeckis’ 3-D CGI workup works on its own merits.

Zemeckis takes the basic Dickens tale and dresses it up a bit – but not too much – with some action movie flourishes [one of the best of which is seen in the trailer]. Other than that, the film is a richly traditional piece in which most, of not all of the dialogue is taken directly from the novel.

In terms of characterization, the film is spot on: the miserly, spider-like Scrooge [Jim Carrey] is sour to his bones; Bob Cratchit [Gary Oldham], Scrooge’s clerk, is a kind-hearted man who even toasts his penurious boss’ health at Christmas; and the three ghosts [all voiced by Carrey] Scrooge capture: the joys of Scrooge’s past; the stark contrast between the present’s dark, solitary Scrooge and both Cratchit and Scrooge’s nephew, Fred; and the potential horrors of Scrooge’s fate.

Make no mistake, A Christmas Carol is a ghost story and there are scary moments that might be too much for some kids. That Zemeckis doesn’t back away from those moments is a measure of how seriously he takes the tale. Of course, he also embraces the story’s humor and, in his more frenetic scenes [Christmas Past sipping Scrooge through the air like Superman and Lois Lane; the boisterous jolliness of Christmas Present; and the new twist on Christmas Yet To Come, which finds a shrunken Scrooge evading hellish horses drawing an ominous hearse] he adds that touch of modernity in his approach that will keep today’s audience hooked.

There are more on-your-face 3-D effects than I was expecting, but because the 3-D adds so much to the vibrancy of Scrooge’s London, that is not a misstep. Instead, it helps direct the audience to unexpected moments both of dark and light.

The biggest surprise, for most, will be Carrey’s discipline in his multiple roles. This not the mugging Carrey of Liar, Liar, or Yes Man – it’s the Carrey of Eternal Sunshine of the Spotless Mind, or The Majestic. In each of his roles, he does precisely what is required to make the character believable – and no more [though, in the case of Christmas Past, it is required that he go large]. Oldham show’s his flexibility in playing both the elder Cratchit and the ailing Tiny Tim, as well the ghost of Scrooge’s late business partner, Marley – all to very good effect.

With the exception of minor characters, the animation is detailed and breathtaking. Even the eyes seem to actually be alive [a long time problem with computer generated imaging].