It is the near future. Astronaut Sam Bell is living on the far side of the moon, completing a three-year contract with Lunar Industries to mine Earth’s primary source of energy, Helium-3. It is a lonely job, made harder by a broken satellite that allows no live communications home. Thankfully, his time on the moon is nearly over, and Sam will be reunited with his wife and their three-year-old daughter in only a few short weeks.

While recuperating back at the base, Sam meets a younger, angrier version of himself, who claims to fulfill the same three year contract Sam started all those years ago. Confined with what appears to be a clone of his earlier self, and with a “support crew” on its way to help put the base back into productive order, Sam is fighting the clock to discover what’s going on and where he fits into company plans. 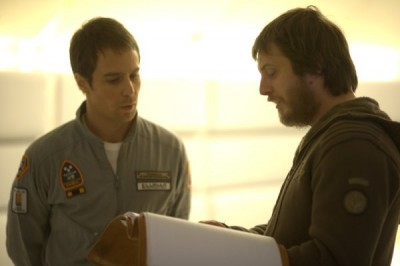 Moon is one of the most powerful science fiction films I have seen this year. It takes the basic form of human interest story which many of today’s science fiction movies lacked and transformed the tale into a well-done movie. With its very limited casting, futuristic setting, and a though provoking quest of our own humanity; Moon sets that standards of what today’s science fiction films should be. Moon follows along the lines of classic sci-fi movies like Blade Runner, Alien, and Outland. Moon takes us of a journey of self-discovery within the very essence of humanity itself. For the dramatic effect, Sam Bell encounters himself in the form of a clone who is bitter about the choice he made those years. The theme touch the very heart of matter. It asks the very human question “If you met yourself in person, would you truly like yourself and allow yourself to see your faults?”

With a limited budge of only $5 Million, Moon delivers the same quality of a expensive blockbuster. I have to give a very high praise to Sam Rockwell for his portrayal as Sam Bell. Rockwell’s performance is nothing short of perfection. I can only imagine the true courage of Rockwell for portraying Astronaut Bell and his clone. His performance of playing an astronaut nothing dealing with isolation on the moon, his homesickness of his family, and interacting with both his younger self and Gerty the emotionless robotic companion was outstanding.

Kevin Spacey’s performance of Gerty was very compatible of a well-natured robot. Spacey, may only been a voice counterpart for Sam Bell but he provided the only companionship the astronaut. Gerty is eerily similar to the HALL 9000 from 2001 but more intuned with the safety and well-being of Sam. When I interview Duncan Jones earlier about Kevin’s take on Gerty, he described as “he really understood the science fiction references like HAL and Huey, Duey, and Louie from Silent Running. He was able to get into character immediately.” I have to hand it to Kevin Spacey that any role he plays, he delivers 100% and this role is no different.

For Duncan Jones, his theatrical film debut as a director was nothing short of a grand opus. He took a story that questions our humanity and brought it to the screen with the greatest of ease. He pays homage to the classic science fiction film that depends on mankind’s integrity to accept morality and survival without the use of lasers, starships, or future technology. Duncan Jones did the unthinkable by blowing our minds away and giving us something to talk about. For his efforts of bringing a dynamic, powerful movie for the first time out, I highly recommend we take that trip to the MOON and back.

FINAL GRADE: A+ for the human adventure!