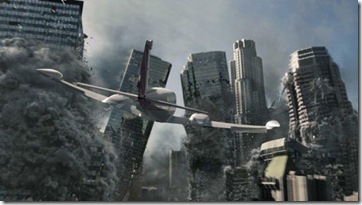 While the politician’s are [gasp!] working together, we get to know the human faces of the film – struggling [and divorced] author Jackson Curtis [John Cusack] and his cute kids, Noah [Liam James] and Lily [Morgan Lily]; his ex, Kate [Amanda Peet] and her new guy, Gordon Silberman [Tom McCarthy]; blustery Russian billionaire, Yuri Karpov [Zlatko Buric], his twin sons Alec [Alexandre Haussman] and Oleg [Phillipe Haussman] and his girlfriend, Tamara [Beatrice Rosen] – and a host of cameos from George Segal, Blu Mankuma, Gillian Barber and others.

How are the remnants of humanity going to survive? Well, it has something to do with China – something Jackson finds out after briefly getting to know conspiracy buff/radio broadcaster Charlie Frost [Woody Harrelson]. Armed with a map from Charlie’s RV, he and his family [and Gordon] set out for China – starting in a twin engine plane flown, protesting all the way, by Gordon. The odyssey that they go on is echoed in an unexpected place – a monastery in Tibet.

Like most director/co-writer [with Harald Kloser] Roland Emmerich’s best known films [Independence Day, The Day After Tomorrow, 10,000 B.C.], 2012 doesn’t make a lick of sense, but it’s a wild ride of natural catastrophes as Mother Nature finally reaches her limit and tries to send humanity back to the Stone Age – if any of them have the temerity to survive [which they will; this is a Roland Emmerich ride, after all].

Emmerich tries to balance scenes of Los Angeles falling into the sea; a huge luxury liner going Poseidon; building crumbling like piles of blocks at the hands of an angry child; a tsunami rising over the Himalayas, and so on, with human moments – shamelessly piling on stirring music and maudlin moments ‘til there’s nothing an audience can do but laugh. When the Curtis family [and Gordon] reach their objective [in spite of callous Chinese army personnel, betrayal by the Russian billionaire and more], naturally there’s one final obstacle that could [should] result in Jackson’s death – and possibly Noah’s.

By this point, laughter is not only a possible response it’s the only appropriate response. 2012 somehow manages to b fun through sheer desire to please. It’s ten different kinds of cheese, but on the right crust, ten kinds of cheesy can make for an ooey-gooey pizza delight. If you’re in the mood – like I was –for a super-cheesy movie, 2012 will give you all you can handle.