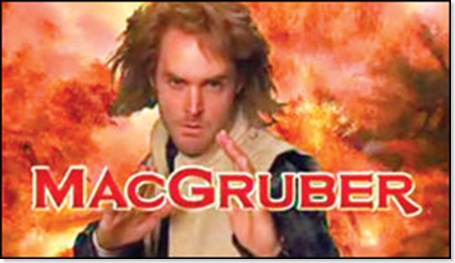 Forte will reprise his role as the legendary, much decorated MacGruber, who is pulled out of retirement as a monk in Ecuador by a colonel, who needs him once more to fight on behalf of his country. This time the mission involves going up against the evil Cunth, who has a nuclear warhead; the mission is personal because Cunth killed MacGruber’s bride.

Word is that Ryan Phillippe is being recruited to play Piper, an Army officer forced to pair up with a reluctant MacGruber, with Val Kilmer in discussions to play Cunth, the evil warlord villain. Kristen Wiig will also be reprising her role as Vicky, MacGruber’s sidekick and love interest.

Over at New Line Cinema a new MacGyver movie is currently in the works which Raffaella De Laurentiis, daughter of Dino De Laurentiis, is producing through her Raffaella Prods. along with Martha De Laurentiis and series creator Lee Zlotoff. No actors have yet to be cast and no writing team has been assigned, so fans and viewers will have to take bets on which movie reaches the big screen first MacGruber or New Line’s MacGyver film. It looks like MacGruber is in the early lead, but as countless have discovered, its wise to never bet against MacGyver! Yet this time could it be possible he may have met his equal.

No production date is set for either movie.