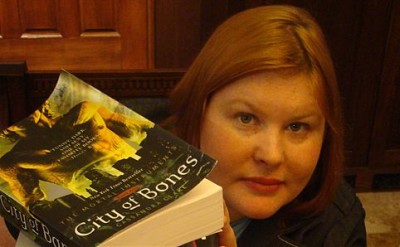 When The Mortal Instruments: City of Bones was released in theaters, I said “Despite its two hours-plus running time, City of Bones manages to introduce all kinds of plot points without ever giving us of the rules that cause its world to function in the way that it does.”

Now, ABC Family has ordered a The Mortal Instruments TV series called Shadowhunters. The series – which will tell the story of Clary, the 18-year old who discovers that all legends are true and that she has a crucial role to play in a world where the supernatural is real – will have the opportunity to get it right.

Mortal Instruments author Cassandra Clare said, of the move by ABC Family, “I’m excited to see ABC Family bring the world of the Shadowhunters to life. As a huge fan of long-form television drama, I can’t wait to see the story unfold and for the fans to have more time with the world and the characters.”

The series goes into production in May. Casting news will be released later. For more, follow the jump.

“’Shadowhunters’ is a big epic saga that will resonate with viewers who come to ABC Family for the ‘Harry Potter,’ ‘Hunger Games,’ and ‘Twilight’ franchises,” said Ascheim. “A New York Times bestseller for 122-consecutive weeks, with over 35 million copies in print worldwide, ‘Shadowhunters’ is the perfect story to share with our audience.”

Burke continued, “Clary is a strong, dynamic and captivating character that our audience will immediately identify with. They will want her to succeed and will root for her on her journey to become who she was always meant to be. The series has a passionate fan base and an expansive universe that can sustain multiple seasons to come.”

“I’m excited to see ABC Family bring the world of the Shadowhunters to life. As a huge fan of long-form television drama, I can’t wait to see the story unfold and for the fans to have more time with the world and the characters,” added book author, Cassandra Clare.

“Shadowhunters” is produced by Constantin Film, and Ed Decter serves as executive producer and showrunner.

Cast to be announced at a later date.

Part of the Disney/ABC Television Group, ABC Family is distributed in over 97 million homes. ABC Family features programming reflecting today’s families, entertaining and connecting with adults through relatable programming about today’s relationships – told with a mix of diversity, passion, humor and heart. ABC Family’s programming is a combination of network-defining original series and original movies, quality acquired series and blockbuster theatricals. For 2014, ABC Family has launched the “WATCH ABC Family” authenticated service which allows viewers with participating TV subscription services access to 24/7 live viewing of the network, as well as continued on demand access to such popular series at home and on the go via a wide array of devices. ABC Family is also the destination for annual Holiday events with “13 Nights of Halloween” and “25 Days of Christmas.”