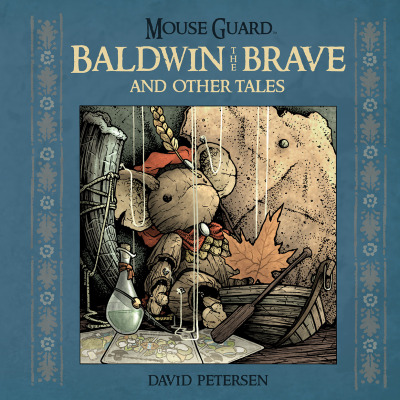 Mouse Guard: Baldwin the Brave and Other Stories will be available November 5th. Follow the jump for further details – including ordering codes.

MOUSE GUARD: BALDWIN THE BRAVE AND OTHER TALES Cover by David Petersen

“Mouse Guard continues to be a perennial favorite for a legion of readers, and it’s easy to see why,” said BOOM! Studios Editor-in-Chief Matt Gagnon. “David is truly a unique talent that approaches everything he creates with passion, innovation, and the handmade touch of an artisan. We’re honored to publish these stories and characters that we love so much. And the only way to do them justice is to collect these Free Comic Book Day stories, as well as two brand-new stories, in a beautiful hardcover that will sit nicely alongside the rest of the Mouse Guard collection.”

In Mouse Guard: Baldwin the Brave and Other Tales, every hero was once a child, listening to stories of the heroes who came before them. It is the same with the Mouse Guard. Six mouse fables are spun to a few familiar youngfurs, reminding us all to be brave, stay true to ourselves, and follow our hearts. Brand-new stories include “Service to Seyan,” set in the land where Mouse warriors travel after death, and “Oh, Day Away,” a tale of the insect faeries of the Mouse world!

The Mouse Guard: Baldwin the Brave and Other Tales 8″ x 8″ hardcover arrives from Archaia in comic shops on November 5th with a cover price of $14.99, under Diamond order code SEP141157. (The Final Order Cutoff deadline for retailers is October 13th.) Not sure where to find your nearest  comic retailer? Use comicshoplocator.com or findacomicshop.com to find one! It’s also available for order directly from boom-studios.com.