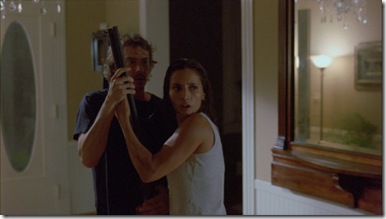 Syfy’s Monsterwolf [tonight, 9/8C] is a vast improvement over most of the movies that the network originals that run on the “most dangerous night of the week.” The story is pretty simple – workers for Holter Oil blast away instead of respecting a Native American artifact and loose a dark guardian spirit, called the Kachinawaya,that begins targeting the company’s employees – but it’s done with a certain style and wit that go a long way towards compensating for the cheesy effects.

The abovementioned artifact is found, partly buried in land that Stark’s [Robert Picardo, Star Trek: Voyager, Stargate Atlantis]] oil company wants to plumb for oil [obviously], but when his crew onsite detonates a large quantity of C4, all it does is blow away the rest of the ground that covers the artifact, unleashing a monstrous wolf that kills them all – in a mess bloody shredding. This gets the town’s veteran top cop, Sheriff Bennett [Marc Macaulay, Burn Notice, Transporter 2] involved.

The deaths don’t bother Stark. In fact, he hires a lawyer who once lived in the town, Maria Bennett [Leonor Varela, Cleopatra], to help him persuade the townspeople to sell their land to him in a move to pressure the leader of the local Choctaws, Chief Turner [Steve Reevis, Fargo, Into the West], to sell the rights to drill on native lands. Meanwhile, the giant wolf is targeting his employees – and an old man who sells him his property. Of course, there’s also Maria’s ex, Yale [Jason London, Jason and the Argonauts, Wildfire] and his best buddy, Hunter [Levi Holiman] and a quartet of professional killers who constitute Stark’s weapon of last resort.

Despite chest CG and practical effects for the wolf, Monsterwolf is great fun for a number of reasons: Charles Bolon’s script is sharp and witty [“Why are we still friends?” “Inertia!”]; director Todor Chapkanov balances frenetic moments of action against a more measured pace for character and to build suspense; Picardo makes a terrific scenery chewing villain, and the rest of the cast is solidly onboard with both the film’s wit and edge. There’s even a cool animated sequence that explains the origin of the big, bad wolf that’s simple, yet fun.

One of the things that held my attention was that Monsterwolf is not a werewolf movie. In the hands of Bolon and Chapkanov, such a film might be interesting, but this fresh variation on evil spirit movies is better without that extra set of overused tropes. Most of the laughs, here, are intentional [though a few aren’t] and most of the character beats work. There are several good moments of suspense and a few interesting arcs where the characters are – then aren’t [or vice versa] – potential targets for the beastie.

Unlike Sharktopus, which was fun because it was so silly, Monsterwolf is fun because it gets it right often enough to make the cheesy effects tolerable [even acceptable…].