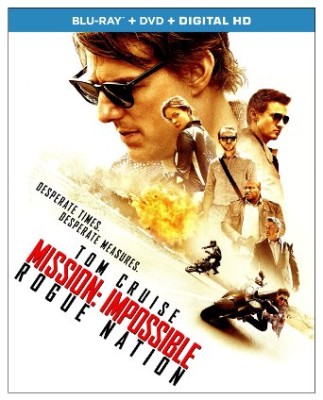 Blu-Ray Special Features include: Commentary with Tom Cruise and writer/director Christopher McQuarrie and seven featurettes. Follow the jump for more.

Get it on Digital HD Four Weeks Early on November 17

With his elite organization shut down by the CIA, agent Ethan Hunt (Cruise) and his team (Renner, Pegg, Rhames) race against time to stop the rise of a new global threat, The Syndicate, a dangerous network of rogue operatives turned traitors.  To stop them, Ethan must join forces with an elusive, disavowed agent (Ferguson) who may or may not be on his side as he faces his most impossible mission yet.

The MISSION: IMPOSSIBLE—ROGUE NATION Blu-ray Combo Pack with Digital HD is loaded with cast and crew interviews and a commentary by Tom Cruise and Christopher McQuarrie.  Plus, get an inside look at the movie’s incredible stunts, including the jaw-dropping Airbus stunt, the nail-biting underwater sequence and the riveting Moroccan car and motorcycle chase, and much more.

The Blu-ray Combo Pack also features a Dolby Atmos® soundtrack*, which delivers captivating sound that places and moves audio anywhere in the room, including overhead, to bring entertainment alive all around the audience.

The MISSION: IMPOSSIBLE 5-Movie Collection includes access to a Digital HD copy of each film as well as the following special features: