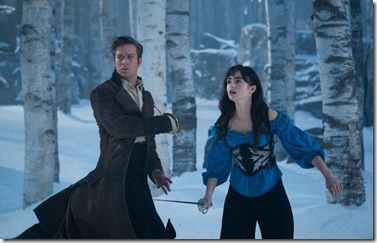 The first of this year’s two takes on Snow White, Mirror Mirror is a sumptuous visual feast – the trademark of director Tarsem Singh – with enough laughs, action and romance to make it worth a trip to your local multiplex.

Seemingly told from the perspective of the widowed Queen [Julia Roberts], Mirror Mirror posits a Snow White [Lily Collins] who is forbidden to leave her room – even on her eighteenth birthday, while the queen spreads propaganda that she’s an ugly, monstrous mistake of nature.

When she does finally does venture outside the castle walls, Snow discovers that the queen has taxed her kingdom into poverty to support her lavish lifestyle. Meanwhile, the almost indecently handsome Prince Alcott [Armie Hammer] has been robbed by a gang of seeming giants – seven acrobatic dwarves on accordion stilts – and hung upside down, semi-naked, from a tree [setting up one of the better ‘meet cutes’ ever between him and Snow].

After Snow upstages the queen at an ultra-posh ball meant to get Alcott to fall in love with the older queen, said queen orders her valet/butler/yes person, Brighton [Nathan Lane], to take snow into the forest and feed her to The Beast. Brighton can’t do it and, when the Beast’s roars fill the forest, he hotfoots it back to the castle while Snow winds up meeting the thieving dwarves – who in no way other than physical stature resemble any version of the seven we’ve ever seen before.

As the queen uses magic to gains Alcott’s love, the dwarves train Snow to win back her kingdom in one of the more inventive and fun training montages I’ve ever seen.

I won’t even try to describe Mirror Mirror’s amazing costumes and sets – even for a Tarsem film, they are incredible. The action sequences are more fun than I was expecting because they are more inventive than most – the accordion-stilted dwarves put on quite a show, just for starters. 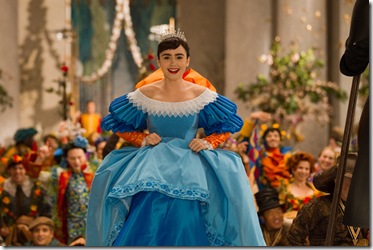 Roberts may come off more as petulant than evil for most of the film, but there are moments when she reaches that dark place and convinces – especially in the last few moments. Hammer is swell as the charming – if frequently embarrassed – Prince Alcott. Her really jumps in with both feet.

The dwarves – Jordan Prentice, Mark Povinelli, Joe Gnoffo, Danny Woodburn, Sebastian Saraceno, Martin Klebba and Ronald Lee Clark – are burdened by having only one pronounced trait [Gnoffo’s Grub loves to eat; Prentice’s Napoleon is a wiz with fashion; Woodburn’s Grimm fancies himself a wolf, and so on], but they pour a lot of energy into their roles and come off pretty well, overall.

In the central role, Lily Collins is mostly adequate as Snow White. She somehow manages to remind of Audrey Hepburn and the young Elizabeth Taylor simultaneously, and, as the film progresses, create a core of steel under the surface of the innocent victim Snow was. She and Hammer have the kind of chemistry that is needed to make the romantic aspect of the film work. She’s also a pretty good singer – she does the song over the closing credits.

The biggest problem with Mirror Mirror is that the writing is inconsistent. Screenwriters Melissa Wallack and Jason Keller haven’t managed to find the precise balance between dark and light that is needed to elevate the story beyond momentary, rather ephemeral fun. This is not one of those cases where drama twists into humor on a dime and works. No, the transitions from the humorous to the more dramatic might be sudden, but they don’t feel like a natural evolution so much as a jarring application of an emergency brake following by a wrenching of the steering wheel. It’s a good thing, then, that there are so few truly dark moments here.

Tarsem may frame a beautiful film – and his is a unique vision in terms of design – but he isn’t as good at pacing for humor and action as he is for pure presentation [which is why the oddly appropriate Bollywood-inspired number over the closing credits works], so much of what works comes down to the cast’s chemistry and energy. Fortunately, they are very good and so Mirror Mirror is a pretty enjoyable confection – but like a meringue, once it’s over and done, it probably won’t stay with you after you leave the theater.