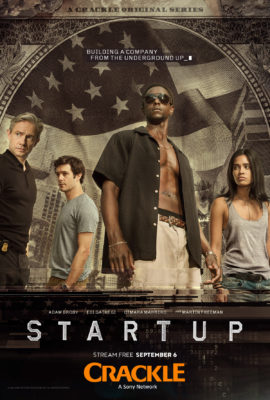 StartUp is the new Crackle series that brings all these disparate elements together. Check out the new, extended trailer for the series after the break. StartUp premieres on September 6th. Follow the jump for a scene in which Agent Rask stops by Nick Talman’s office.

Set in the steamy streets of Miami, what do a young banker from Brickell, a gorgeous Cuban hacker from Haileah, and a thug from Little Haiti have in common?? In Crackle’s new scripted drama, “StartUp,”, the answer is made abundantly clear during 10 hour-long episodes that explore the launch of GenCoin, a potentially revolutionary idea for an unregulated digital currency. Created, directed, written and executive produced by, Ben Ketai (“Chosen,” THE FOREST), the unexpected and fast-paced narrative focuses on the deadly tech war that ignites around the creation of this ingenious algorithm.

Untaxed, untraceable and a possible game changer in the world of finance, GenCoin is incubated on the wrong side of the tracks in the unconstrained and opportunistic streets of Miami by three unlikely allies who don’t necessarily fit the mold of tech entrepreneurs: Adam Brody (“CHiPS,” “The League”) as shrewd financier Nick Talman, Edi Gathegi (“The Blacklist,” “The Blacklist: Redemption”) as Haitian gang leader Ronald Dacey, and Otmara Marrero (“Graceland”) as tech entrepreneur Izzy Morales. Also starring is Martin Freeman (“Fargo,” “Sherlock”) as the brilliant, yet irrational FBI agent Phil Rask who is out to take them down.

Haitian narcotraffickers, sleazy bankers and crooked cops are all at the core of this gritty and provocative thriller which exposes how people corrupt money and examines what happens when high-tech erodes government control of society. Welcome to “StartUp” where even the good get dirty.