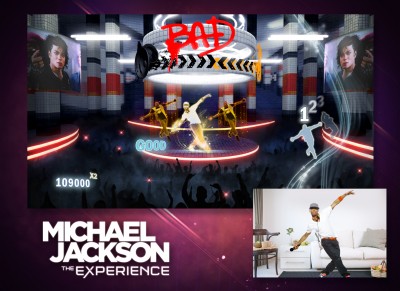 Developed by Ubisoft Montréal, Michael Jackson The Experience using the sensor for Kinect for Xbox 360, will give fans of the King of Pop the feeling of actually performing in Michael Jackson’s shoes.  Ubisoft’s proprietary Player Projection technology projects the player on-screen and into the game itself, where their body will be tracked so they will see their true movements and steps reproduced in the game.  This level of immersion has never been seen before and as players are surrounded by environments inspired by the music videos and live performances of each song, they will truly live the experience. The player’s performance will trigger effects, visuals and even the music itself as fans match their talent to that of the greatest artist of all time, whose music, lyrics and stunningly innovative dance moves continue to excite fans in every corner of the world.

Michael Jackson The Experience for Kinect™ for Xbox 360 sensor is more than just a game as it features a combination of dancing, singing and freestyle moves. The player’s full-on singing and dancing performance takes place in jaw-dropping sets with incredible lighting, special effects, and a completely energized million-strong crowd just waiting to cheer on every move.I’m still not buying a $150 controller just to play this thing, no matter how cool it sounds.