Walt Disney Studios Chairman Alan Horn came to play at Disney’s D23 Expo. The huge crowd in the packed Disney Arena was in pure hysterics over Disney’s upcoming film slate. Horn kicked off the presentation by talking about all of their various divisions and the breath of it is just kind of staggering – Lucasfilms, Marvel, Disney Pictures and if you add in the animation divisions, amazing.  What surprised me the most about the over 2 1/2 hour presentation was how much exclusive, never before seen footage was actually presented. There was some real meat on the bone here, I will post footage from the event when I get home and have a somewhat decent internet connection.  First out of the gate was Marvel Studios President, Kevin Feige. 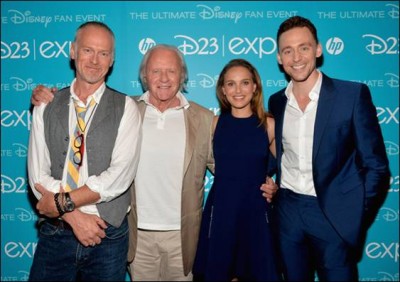 After the Star Wars announcements, Marvel’s Kevin Feige, President of Marvel Studios, kicked things into high gear by giving fans a rundown of Marvel’s Phase Two films starting with brand new footage from Thor: The Dark World.  The first brand new clip that we saw involved a big battle on Asgard that involved Thor (Chris Hemsworth) and Sif (Jaimie Alexander) kicking some butt, then Thor takes out a giant rock creature in about 10 seconds. After that short clip, we got a surprise appearance from  Natalie Portman, Tom Hiddleston and Anthony Hopkins. Three introduced another brand new clip – this one featuring Jane’s first day on Asgard and her meeting Odin (Natalie Portman) for the first time. It was a very cute scene that included a joke about Odin comparing Jane to a Goat and her being surprised that Thor “talked to his dad” about her. The presentation concluded with a brand new full trailer from the movie with lots of cool new footage. Thor: The Dark World is coming in Nov 2013. 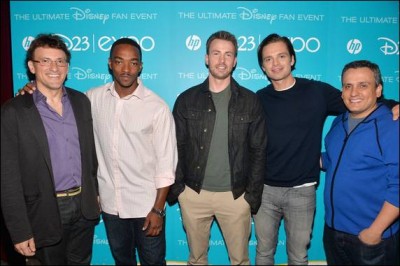 After Thor, we got more information on Captain America: The Winter Soldier. The first clip was a long clip that  started off slow, showing Captain America (Chris Evans) getting into an elevator and all of these guys getting in after him. It becomes clear that these are bad guys, he asks the Guys if they want to get out “now” before the scene explodes into an enclosed elevator fight with Cap taking on 10 or more guys in a cramped elevator.  Chris Evans, Sebastian Stan and Anthony Mackie then surprised the audience by coming on stage to introduce yet another brand new clip – this one showcasing the banter between Black Widow (Scarlett Johansson) and Cap as they infiltrate an enemy sub.  The footage was so early that there were some un-rendered CGI shots of the battleship and planes, but it did give us some nice Black Widow action moments. After these two clips we were treated to a new full length trailer.  Captain America: The Winter Soldier is coming Spring 2014. 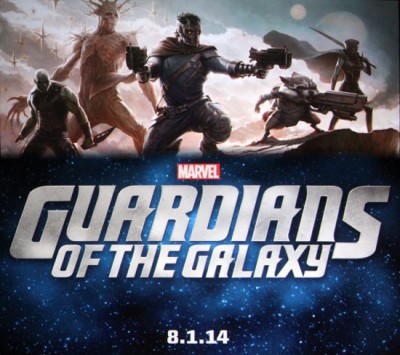 The Crowd was totally pumped when Fiege came back out and started talking about next year’s Guardians of the Galaxy Movie. Glen Close is going to be Nova Prime? Wow, I did not see that coming! The full cast is now set and has started shooting in London. The cast includes Chris Pratt, Zoe Saldana, Dave Bautista, Lee Pace, Michael Rooker, Karen Gillan, Djimon Hounsou, with Benicio del Toro, John C. Reilly and Glenn Close.  Feige surprised everyone in the crowd by leaving us with a brand new teaser clip from the movie.  The clip did a great job of setting the tone and providing just enough information.  We’re introduced to the sarcastic Star Lord (Chris Pratt) before seeing the rest of the rag tag bunch who are behind Prison bars.  As a comic book reader, I have to admit I do not know anything about Guardians of the Galaxy, so I guess I’ll have to bone up on it before the movie comes out next year. Guardians of the Galaxy is coming in Summer 2014