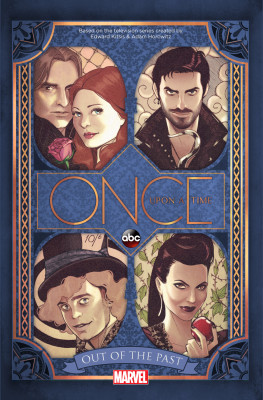 Welcome to Storybrooke, a small New England town where seemingly regular people go about their everyday lives with no idea who they really are – the fabled storybook characters we all grew up with! But Fairy Tale Land is not the “happily ever after” you may have read about – their stories continue, and the Evil Queen has set a dark curse upon their homeland.

Travel back in ONCE UPON A TIME: OUT OF THE PAST to the origin stories of your favorite characters from the show!

Board the Jolly Roger on an adventure with the young Killian Jones, before he was known as the notorious Captain Hook, as he uncovers the mysteries of the Leviathan Shoals and the monster that lurks beneath the surface.

Travel to the Enchanted Forest with the Evil Queen, Regina, where she faces down demons from her past.  Will the skeletons in her closet haunt her forever?

Experience Wonderland in the unforgettable origin tale of Jefferson, the portal-jumping Mad Hatter, and witness the loss that caused him to lock away his magical hat for good.

ONCE UPON A TIME: OUT OF THE PAST brings together the best graphic novel creators in the industry, including “Once” series writer Kalinda Vazquez, returning writer Corinna Bechko (ONCE UPON A TIME: SHADOW OF THE QUEEN, PLANET OF THE APES), and featuring the lush art of Eisner award winning Janet Lee (DAPPER MEN, EMMA), Pascal Campion (PENGUINS OF MADAGASCAR, SHERMAN AND PEABODY), Vanesa Del Rey (HIT,SINATORO), and Betsy Peterschmidt (BOYS WITH WINGS) with cover artist Stacey Lee (SILK).

ONCE UPON A TIME: OUT OF THE PAST will arrive in comic shops and bookstores everywhere on April 1st, 2015.

Currently in its fourth season, ONCE UPON A TIME returns with all new episodes Sunday, March 1, 2015 at 8|7c on the ABC Television Network.

About “Once Upon a Time”
Master storytellers Edward Kitsis and Adam Horowitz (“Lost,” “Tron: Legacy”) invite everyone to join Emma Swan, Snow White, Prince Charming, the Evil Queen, Hook and all the other resident fairy tale characters on their quests to reclaim their happy endings.

Welcome to Storybrooke, Maine, a small town that probably won’t show up on your GPS, but it’s a magical place to visit.  Reality and myth merged after Emma broke Regina’s curse, which had deprived the fairy tale characters of their memories and trapped them in our modern world.  When they finally regained their identities, our heroes were dismayed to discover that they weren’t transported back to Fairy Tale Land.  To make matters worse, Rumplestiltskin – aka Mr. Gold – decided to escalate his power struggle with Regina by introducing magic into the town.  But this is our world, and magic always has a tendency to yield unfathomable consequences.

About Marvel Entertainment
Marvel Entertainment, LLC, a wholly-owned subsidiary of The Walt Disney Company, is one of the world’s most prominent character-based entertainment companies, built on a proven library of more than 8,000 characters featured in a variety of media over seventy five years.  Marvel utilizes its character franchises in entertainment, licensing and publishing.  For more information visit marvel.com.  © 2015 MARVEL