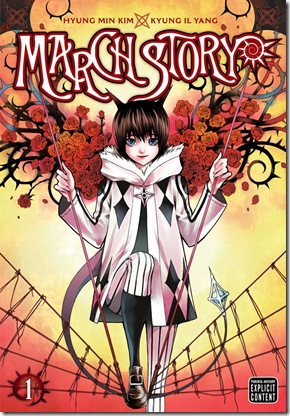 ‘You must never touch things if you don’t know what they are,’ says March at the beginning of Volume 1 of March Story, a darkly entertaining manga from VIZ Media. Ills are dark spirits that hide within the form of beautiful works of art and possess the unwary who come in contact with them – forcing them to acts of unspeakable violence. March is one of the Ciste Vihad, hunters who track down the Ills – and/or the unfortunates who have become possessed by them. Some they can save. Others…

In short order, we get to see March in action [weapon of choice: magic thorns] and learns the rules that govern Ill hunting. If March can get to a possessed subject before they kill, that soul can be recovered and the person will live on. If a possessed subject kills, then the host body will die when March forces the Ill from their body. You can tell when a human has been possessed by an Ill because they sprout horns – if the horns are white, the possessed person has not yet killed; if they’re red [stained with the blood of their victims], it’s too late to save them.

March has two secrets that are revealed in Volume 1. Both are given dramatic reveals, so I won’t describe them here – but they are shocks to both the reader and the Ills.

Thorn Hunter deals with the possession of a circus clown – a young, insecure woman who wishes she was some other kind of performer. She encounters March before she finds the Ill-inhabited object [a single earring] but fails to heed the warning she is given. March’s first big reveal occurs here. This is the most melancholy chapter of Volume 1.

Orche The Masked revolves around a couple who make masks and are secretly in love with other – though neither realizes their love is reciprocated. This is the first time we see what happens when the possessed subject of an Ill has killed before the Ill can be forced out.

Windblown Memories of Colored Glass, on the other hand, is a comical tale of an Ill-possessed child who doesn’t seem to want to hurt anyone. He just wants to keep a promise – though he has no idea what that promise is, or to whom it was given. In this chapter, March is utterly confounded by both the possessed boy and a strange antiques shopkeeper named Rodin. This story serves to show that, even in a world which can spawn demons like the Ills, things are not always simply black or white. This is where the second of March’s reveals takes place.

The concluding chapter of March Story, Black Dream, is the March’s origin and involves an evil woman who compels children to build her engines that will drain humans of their blood. Of the four tales in Volume 1, this is the one that falls into the area of pure horror.

What I like most about March’s story is that it slowly builds a mythos and carefully develops the character of March. March’s world is definitely a study in contrasts, though those contrasts are often minimal and not what we’re expecting.

The art is better than average and, in places, quite beautiful. Like the Ills, the writing and art draw us into the story and alter our perceptions along the way – though in our case, the result is to enthral and entertain rather than to possess [though I can see how it would be easy to become obsessed with the series]. This is a series that definitely bears further investigation.

Note: This is not for children!