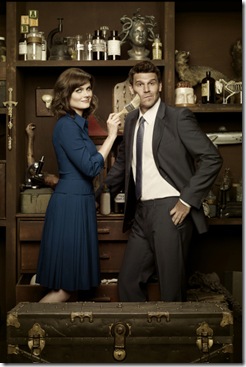 When Bones [Fox, Mondays, 8/7C] returns on April 2, FBI Special Agent Seeley Booth and forensic anthropologist Dr. Temperance Brennan will welcome their first child [a girl] into the world and onto the series – but that’s not the only big news for the show, which has been picked up for an eighth season. Fox made the announcement this morning.

BRENNAN AND BOOTH HAVE ANOTHER REASON TO CELEBRATE

AS FOX DELIVERS AN EIGHTH SEASON OF “BONES”

It’s a Girl! BONES Returns with a New Arrival on the First of Seven All-New Episodes Monday, April 2, on FOX

FOX has renewed the hit series BONES for its upcoming eighth season, it was announced today by Kevin Reilly, President of Entertainment, Fox Broadcasting Company.

‘Over the past seven seasons, Hart Hanson, Stephen Nathan and the incredible BONES cast and crew have redefined the traditional crime procedural with an irreverent and adventurous sensibility and I’m really happy to have this distinctive, fan-favorite on our schedule for another season,’ Reilly said.

BONES returns with seven in a row, all-new episodes on a new night and at a new time beginning Monday, April 2 (8:00-9:00 PM ET/PT). In the first of these episodes, The Prisoner in the Pipe, the remains of an escaped convict are found in a residential sewer, but an examination of the sewer pipes indicates that the murder occurred within prison walls. When Brennan (Emily Deschanel) insists on solving the crime – despite Booth’s (David Boreanaz) pleas for her not to overexert herself – the expectant couple experience a very untraditional arrival of their baby daughter.

During the upcoming eighth season, BONES will celebrate its 150th milestone episode.

BONES is from Far Field Productions and Josephson Entertainment in association with 20th Century Fox Television. The series was created by Hart Hanson. Hanson, Stephen Nathan, Ian Toynton, Barry Josephson and Carla Kettner are executive producers. “Like” BONES on Facebook at www.facebook.com/Bones. Follow the series on Twitter at www.twitter.com/BonesonFox and join the conversation at #Bones.