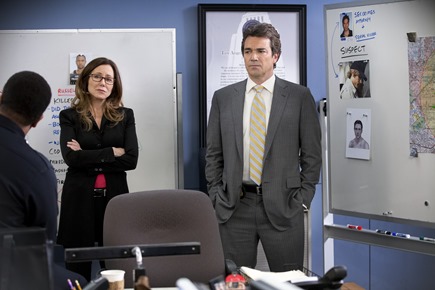 If you haven’t gotten caught up on TNT’s Major Crimes (Mondays, 9/8C), the network will give you a chance to do so – but you’ll have to be a bit of a night owl. Beginning at 2am (1C), Sunday, June 8th,  the network will run the entire 19-episode season two leading into Major Crimes’ third season premiere on Monday, June 9th (9/8C).

Cases the squad will be called upon to investigate in season three of Major Crimes include the disappearance of two kids and their father, the death of the defendant in a rape trial and a complex case involving arranged marriages and diplomatic immunity. In addition, one of Sanchez’s old cases will resurface when it turns out a man he put away for manslaughter might be innocent. And Provenza and Flynn will be drawn to a ritzy estate to investigate the murder of a dog, but they’re going to have to solve the case with unwanted help from an amateur sleuth they’ve encountered before. On the home front, Sharon Raydor will try to help Rusty put his turbulent past behind him, a goal made far more difficult when a member of the young man’s biological family returns, threatening Rusty’s hard-won stability.

3 a.m. – "False Pretenses" – TV-14-DLV
A complex murder-suicide case has the department reeling. Meanwhile, when Rusty receives a mysterious and threatening letter Emma demands that he be relocated.
4 a.m. – "Under the Influence" – TV-14-V
A meddling television writer-producer (guest star Ben Feldman) accompanies Sanchez and Tao on a ride-along so he can get an inside look at the LAPD. But what starts out as a simple outing quickly gets out of hand.

5 a.m. – "I, Witness" – TV-14-DLV
The LAPD flies a material witness into Los Angeles to testify, but in a horrible turn of events their witness winds up as the key suspect in an entirely new murder. Personal and professional stress takes a toll on Flynn. And the squad takes bets when Rusty brings a girl from class to hang out with him at the department.

7 a.m. – "Boys Will Be Boys" – TV-14-DLV
When a child with gender dysphoria goes missing, the Major Crimes division scrambles to solve the emotional case before it’s too late. Torn between several suspects, the squad has to be careful as it tries to connect the evidence to a dangerous bully. Meanwhile, Jack Raydor (guest star Tom Berenger) attempts to make up for years of lousy parenting.

8 a.m. – "Rules of Engagement" – TV-14-LV
In a case that brings gang violence and social profiling to the forefront, the squad realizes that things are not always as they seem. Complicating matters further, Sharon offers Jack (guest star Tom Berenger) the opportunity to be a court-appointed attorney in the case. Meanwhile, Rusty expresses apprehension about meeting Kris’ (guest star Madison McLaughlin) parents.

9 a.m. – "The Deep End" – TV-14-DLV
The media goes into a frenzy over race relations when the body of a young Latino man is found at the home of a white award-winning swimming coach. Flynn struggles with an emotional dilemma on the eve of his daughter’s wedding. Kris’ mother (guest star Lori Loughlin) pays Raydor a visit to discuss some concerns.

11 a.m. – "Backfire" – TV-14-DLV
In a case that hits a little too close to home for Rusty, a 19-year-old prostitute is brutally murdered. The squad rushes to reach a deal with the remorseless killer they believe is part of a larger criminal enterprise. Their efforts, however, do not sit well with the judge assigned to the case.

12 p.m. – "Poster Boy" – TV-14-LSV
The team works strategically to capture a spree killer who has put everyone on high alert. Trying to solve the case quickly, Raydor is torn between two seemingly right decisions, each of which comes with major consequences. Meanwhile, Rusty is given some extra freedom, but more threats leave him afraid to stray far from home.

1 p.m. – "Pick Your Poison" – TV-14-DLV
After a bad batch of drugs claims the lives of two brothers, the race is on for the squad to find the dealer before more of their fellow high school students are threatened. Feeling smothered by his new around-the-clock security detail, Rusty faces a big decision.

2 p.m. – "Jailbait" – TV-14-DLV
When a newly released prisoner misses two back-to-back parole meetings, the squad is called in to track him down after the suspect’s therapist expresses concerns over his mental state. Meanwhile, Sharon invites therapist, Dr. Joe Bowman (guest star Bill Brochtrup), to the office to evaluate Rusty over a game of chess. Esai Morales also guest stars.

3 p.m. "All In" – TV-14-LV
When a body turns up at a posh country club in a quiet neighborhood, the squad’s investigation leads them down a money trail full of surprises. Flynn is noticeably distracted on the job, and Emma’s actions have Rusty questioning her intentions, causing him to distrust her even more.

4 p.m. – "Curve Ball" – TV-14-LV
Christmas vacation is interrupted for the Major Crimes Division when a baseball scout is found dead in his RV. The squad works through the murder case, unfolding a complicated kidnapping scheme. Meanwhile, Rusty opens up to Dr. Joe (guest star Bill Brochtrup) about his mom. Directed by Jon Tenney.

5 p.m. "Risk Assessment – TV-14-LV
When a well-off graduate student gets shot to death in a gang-riddled neighborhood, the Major Crimes Division must work with the FBI, including Fritz Howard (guest star Jon Tenney) to find his killer. Throughout the investigation, it is revealed how each member of the unit became interested in joining the police force.

6 p.m. – "Year-End Blowout" – TV-14-DLV
A year-end blowout sale becomes literal for a used-car lot after one of its owners is killed when a bomb explodes. While the squad tries to find who is responsible, Rusty dons a bulletproof vest under the watchful eye of Lt. Chuck Cooper (guest star Malcolm-Jamal Warner), a Special Investigation Section supervisor, in an attempt to catch the person responsible for threatening his and Sharon’s life.

7 p.m. – "Return to Sender" – TV-14-LV
The squad must work quickly to track down a serial killer before he strikes again. Meanwhile, things get dangerous over a game of chess.

8 p.m. – "Return to Sender, Part 2" – TV-14-DLV
The Major Crimes unit draws closer to finding a dangerous serial killer. Rusty faces his biggest challenge yet when he bravely takes the stand against Phillip Stroh. Complicating the case further, the team goes head to head with Linda Rothman a tough, powerful attorney who doesn’t let morals stand in her way of winning a case.

9 p.m. SEASON 3 PREMIERE: "Flight Risk" – TV-14-DLSV
When a father and his two young children go missing, the squad has to work quickly to find them, while uncovering a slew of terrible family secrets along the way. Meanwhile, Raydor does her best to trust Rusty as he begins to take suspicious trips out on his own. Kathe Mazur guest stars.

TNT is television’s destination for drama. Seen in 101 million households and ranking among cable’s top networks, TNT is home to such original drama series as Rizzoli & Isles, Major Crimes, Falling Skies, Perception, Dallas and Franklin & Bash. TNT’s upcoming slate of scripted dramas includes the original series The Last Ship, Murder in the First, Legends, The Librarians, Public Morals, Proof and Transporter The Series, which will make its U.S. television debut on the network this fall. TNT also features such dramatic unscripted series as Cold Justice, APB with Troy Dunn and the upcoming On the Menu and Wake Up Call. In addition, TNT is the cable home to popular dramas like Hawaii Five-0, Castle, The Mentalist, Bones and Supernatural; primetime specials, such as the Screen Actors Guild Awards®; blockbuster movies; and championship sports coverage, including NASCAR, the NBA and the NCAA Division I Men’s Basketball Championship.