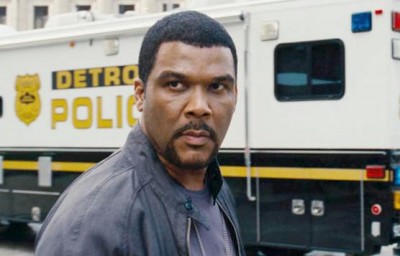 Does James Patterson still write all his novels? He churns out a new book every month. Alex Cross is a reboot of the old film franchise with Tyler Perry taking over the character from Morgan Freeman. While the movies never seemed to live up to the book version of the character, Freeman added a certain gravitas to the role.

Tyler Perry, best known for his offensive (according to some), over the top portrayal of the acerbic black grandmother Madea has the unenviable job of reinventing himself. His last film Mr. Deeds and now this one shows he wants to get away from the role that made him famous and become a more serious actor.  He does an adequate job with the material given.

The real standout performance here is a barely recognizable Matthew Fox as a psycho thrill seeker Assassin named Picasso, who not only likes killing, but enjoys inflicting the most amount of pain he can before dealing the death blow. Fox has completely remade his body and look for this role and underwent a pretty astounding transformation. 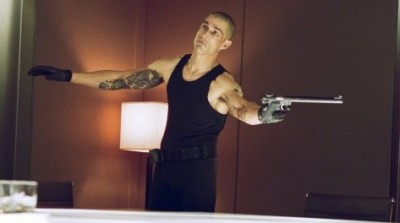 Alex Cross features a younger, pre-DC detective who is seasoned but tired of being investigating murders. He wants to take a nice quiet job, working normal hours, in DC and be one of the FBI’s top profilers. He crosses swords with Picasso when he interrupts one of his hits.  This locks the two into a death match for the rest of the movie.  Rachel Nichols, Edward Burns,  Jean Reno  and the other actors aren’t given much to work with. This movie really is all about Perry and Fox.

Marc Moss and Kerry Williamson’s script feels safe. The story is a simple, by the numbers procedural with no real surprises. Director Rob Cohen does a lot to keep the trains running on time. The movie never feels slow but at 90 minutes it does feel like there is a lot of padding. For instance there is a ridiculous cage match sequence in the beginning where we see Picasso kick the crap out of some poor guy.

The head scratching moment here occurs when he tells his opponent to “Don’t hit me in the face. Or you’ll never fight again.”  Huh? You are in a cage match and you don’t want to get hit in the face? Amazingly for most of the match the guy doesn’t even try to go for the face.

Another gaping pacing issue is at the midway point in the movie, two major characters are killed. One of them, the movie focuses too much time showing how the death impacts everyone. The other character death (happens at the same time) is barely mentioned or touched on.

The climax of the movie is a poorly shot fight sequence where it looks like whoever was holding the camera was high on Caffine or drugs that day. One of the worst examples of shaky cam, quick edits I’ve ever seen. This movie is for folks who like paint by the numbers procedurals. Its a competent effort and worth seeing for Fox’s transformation.