The 33rd annual Los Angeles Asian Pacific Film Festival (LAAPFF) wrapped the screening of 180 films from 33 countries this week.  It commenced on April 27-May 4 in Los Angeles with an extended version of the festival in Orange County from May 5-May 11. With May being Asian Pacific American Heritage month, what better time to celebrate incredible movies of Asian Pacific filmmakers both locally and abroad than at the LAAPFF!

The festival opened with the 15th anniversary of director Justin Lin’s Better Luck Tomorrow at the Egyptian Theatre in Hollywood. This was a landmark for Asian American cinema in 2002.   Pria, directed by Yudho Aditya, won the Golden Reel Award which is eligible for consideration in the Animated Short Film/Live-Action Short Film category of the Academy Awards.  Makoto Nagahisa direction of And So We Put Goldfish In The Pool won the Linda Mabalot New Directors/New Visions Award.  Gook, Small Talk, Finding Kukan, Mixed Match, Saving Sally, and Joshua: Teenager vs. Superpower lead the audience awards.  Actor John Cho, whose film Columbus made its West Coast Premiere at the LAAPFF, received the Visual Communications Trailblazer Award honoring his acting career and his support for the festival and Asian American Films.

In addition to film screenings, there was the Conference for Creative Content (C3) which is a series of panels on craft and issues facing the industry.  There was a special program making the Rodney King verdict and Los Angeles riots, along with a presentation on “Bronzeville, Little Tokyo”.

The festival was spread over several locations in Los Angeles – Hollywood’s Egyptian Theatre, Koreatown, UCA, the Directors Guild of America, and downtown Los Angeles.  One of the locations in downtown included screenings of twelve short films by the Fil-Am Creative, an organization that promotes advancement of Filipino-Americans in entertainment and media. Among the many attendees at the Fil-Am Creative screenings were Fil-Am actor Dante Basco who graced the red carpet along with fellow Filipinos. Links to all the Fil-Am Creative short films that screened can be found at this link.

A full list of the 33rd Los Angeles Asian Pacific Film Festival awards are shown below:

BREAKTHROUGH PERFORMANCE BY AN ACTOR:  Keigian Umi Tang (THE LOCKPICKER)

A TIME TO SWIM– directed by Ashley Duong

*Eligible for qualifying for the Short Live Action Film Oscar®

Makoto Nagahisa (AND SO WE PUT GOLDFISH IN THE POOL) (Japan)

Audience Awards were voted on in the following festival programs: 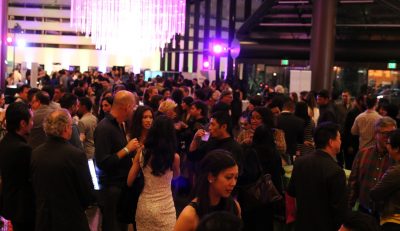 Being an Asian American myself, it always makes me proud to celebrate what makes me, and my culture unique.  The Los Angeles Asian Pacific Film Festival brings to light the different stories of Asians both here in the United States and abroad.  2017 may have seen many changes this year, but the one thing that can never change is the great diversity of this country.  Here’s to celebrating the achievements and impact that Asians have made in the world of entertainment and Hollywood!

Make sure to check out