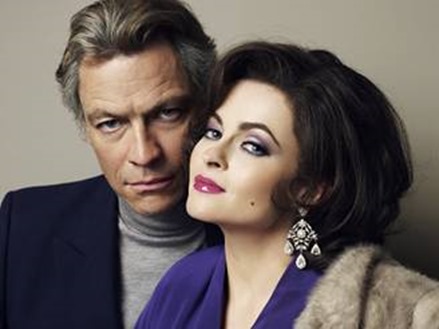 Quite possibly the most glamorous, tempestuous relationship in film history was that of Elizabeth Taylor and Richard Burton. In Burton and Taylor, Dominic West and Helena Bonham Carter portray the legendary stars as they reunite for the 1983 stage revival of Noel Coward’s play, Private Lives – about a divorced couple who unexpectedly reunite while honeymooning with their respective spouses – and discover that performing it puts their personal lives in front of a live audience every night.

Burton and Taylor premieres on BBC America on October 16 at 9/8C. For the full press release, follow the jump.

BAFTA award-winning actors Dominic West (The Hour, The Wire) and Helena Bonham Carter (Les Misérables, The King’s Speech) star as Richard Burton and Elizabeth Taylor – Hollywood’s most volatile on-again-off-again lovers who famously played out every high and low of their love affairs, multiple marriages and divorces right in the public eye. Recognized as one of the most fascinating, glamorous and tempestuous relationships of the 20th century, Burton and Taylor made their last stage appearance together in the critically reviled 1983 revival of Noel Coward’s stage play, Private Lives. This is the story of their ill-fated reunion, on and off stage. Burton and Taylor, a BBC AMERICA co-production, premieres Wednesday, October 16, 9:00pm ET/PT as part of Dramaville.

The film begins in September 1982, as Elizabeth Taylor and Richard Burton hold a press conference to announce their reunion on stage in Private Lives – the account of a divorced couple, Elyot and Amanda, who unexpectedly reunite while honeymooning with their respective spouses. The project sparks rumors about the possibility of another marriage and public speculation begins to grow. In private, however, old frictions play out once again when rehearsals are rocky at best, and Elizabeth, often late, has not learned her lines. Richard suspects Elizabeth of substance abuse and begins to consider his own issues.

Despite the odds, the play opens in New York City to eager crowds in the spring of 1983. Bad reviews prove to be no hindrance to ticket sales with the entire run of the show sold out by opening night. The scene outside the theatre is chaotic with fans lining the streets to catch a glimpse at the infamous couple.  The audience responds enthusiastically as they pick up on what they imagine to be parallels with Richard and Elizabeth’s own situation. Feeling exposed, Richard realizes their onstage reunion has provided a front row seat into their personal lives. The highs and lows of their turbulent relationship are being played out in front of a live audience.

As the run continues so does the tension behind the scenes. Richard and Elizabeth’s relationship, as volatile as ever, threatens to be the demise of their newest endeavor…

On playing the role of Elizabeth Taylor, Helena Bonham Carter says: "You have a responsibility, a massive responsibility I felt, if you play somebody who is real, who has been alive… you’re not only responsible to that person but to everybody who’s known her."

Burton and Taylor is a BBC Drama Production, co-produced with BBC AMERICA. The writer is William Ivory and executive producer for the BBC is Jessica Pope. The director is Richard Laxton and the producer is Lachlan MacKinnon.

Burton and Taylor is the latest title to join BBC AMERICA’s Dramaville, the home of groundbreaking British drama. The Dramaville slate includes the channel’s hit series Broadchurch, Golden Globe®-winning mini-series Luther and previous acclaimed mini-series including The Hour, Spies of Warsaw and Inside Men.

ABOUT RICHARD AND ELIZABETH

When Richard Burton and Elizabeth Taylor met on the set of Cleopatra in Italy in 1961, the attraction was immediate.

They were both married to other people at the time – Richard to his wife of many years, Sybil Williams, and Elizabeth to Eddie Fisher. Elizabeth later said that she had made up her mind not to fall for Richard but on the first day of filming Richard was hung over. Elizabeth felt sorry for him and a bond was made. Word got out that they were an item and soon Rome’s paparazzi were tracking their every move.

Richard and Elizabeth eventually went public with their romance. They married in 1964 but public interest in their relationship did not diminish. Their lavish lifestyle, private planes, jewelry and yachts, helped to cement their position as one of the most famous couples on the planet.

One of Richard’s most extravagant gifts to Elizabeth was the sixty-nine carat pear-shaped diamond that came to be known as the Burton-Taylor diamond. Burton is reputed to have paid $1.1 million for the diamond in 1969. The couple appeared in many films together over the next ten years, most notably The V.I.P.s, The Tempest, Doctor Faustus and Who’s Afraid of Virginia Woolf?

Richard and Elizabeth had always been known for their frequent breakups and extravagant reunions but the strains of living in the public eye eventually caught up with them. They divorced in 1974 but they quickly found it difficult to live apart and married for the second time eighteen months later. Richard and Elizabeth divorced for the second and final time just under a year later in July 1976. They both went on to marry other people. Richard married Susan Hunt, a model, in August 1976 and Elizabeth married John Warner, a US senator, in December 1976.

Richard and Elizabeth both divorced their respective partners in 1982 and in September that same year, they announced they would reunite professionally in a production of Noel Coward’s Private Lives. The premiere was in April 1983 and they spent seven months touring America. During the run Richard married his fiancée Sally Hay.

When the tour was over Richard returned home to Switzerland with Sally. Richard and Elizabeth often spoke on the phone in the following months but they were only to meet again once before Richard died of a cerebral hematoma in August 1984. Elizabeth died at the age of 79 in 2012.

Helena Bonham Carter is one of Britain’s best loved actresses. She has worked with some of the biggest names in Hollywood and has won many awards including a BAFTA for the 2010 multi award-winning film, The King’s Speech. Helena’s portrayal of Queen Elizabeth, the Queen Mother earned her a BAFTA for Best Supporting Actress and an Oscar nomination.

Helena will appear as the Fairy Godmother in Disney’s live-action Cinderella, which will begin filming later this year. She recently appeared in the epic musical drama Les Misérables (2012). She played Madame Thénardier in a brilliantly comic performance alongside Sacha Baron Cohen. She is also well-known for the role of Bellatrix Lestrange in the final four Harry Potter films.

In 1985, A Room With A View introduced Helena to an international audience. She went on to play Don Johnson’s girlfriend in the hit television series Miami Vice in 1987. Other well-known films include Howards End (1992) and Mary Shelley’s Frankenstein (1994). In 1997, The Wings of the Dove earned Helena Oscar, BAFTA and Golden Globe nominations for best actress. She has also appeared in Fight Club (1999), Planet of the Apes (2001) and Alice in Wonderland (2010).

Dominic West has appeared in many award-winning television shows in both the UK and the US. In the US, Dominic is best known for playing McNulty in the critically acclaimed series The Wire. The show ran for five seasons and Dominic was praised, among other things, for perfecting the Baltimore accent. Dominic directed an episode in the final season.

In the UK, he appeared in the critically acclaimed mini-series Appropriate Adult which earned him a BAFTA for Best Actor. He is also known for the role of Hector Madden in BBC AMERICA’s The Hour, which earned him a Golden Globe nomination. In 2008, Dominic played Oliver Cromwell in the BAFTA-nominated series The Devil’s Whore.

Dominic also has a successful career in film and theatre. His film roles include: 28 Days opposite Sandra Bullock; Mona Lisa Smile, with Julia Roberts; and The Forgotten, with Julianne Moore. He also starred as Theron in 300.

On stage, Dominic has appeared in Pedro Calderón de la Barca’s Life is a Dream at the Donmar Warehouse. He took the title role in Butley at the Duchess Theatre and appeared in Othello at the Crucible Theatre in his hometown, Sheffield. Dominic began 2013 by returning to the Crucible to appear in My Fair Lady.

Burton and Taylor is a BBC Drama Production, co-produced with BBC AMERICA.