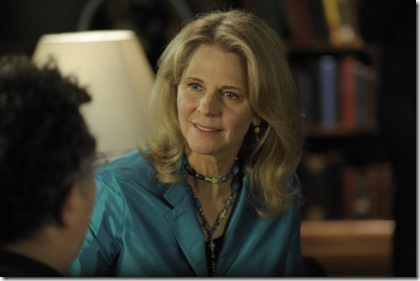 It’s back to school for Myka [Joanne Kelly] in this week’s episode of Warehouse 13, as the Tamalpais University wrestling team has gone from zero for their last seven seasons to undefeated – and one of the team has mysteriously died in a fire. Meanwhile, Artie [Saul Rubinek] is suffering from the reappearance of his appendix – an annual event – and Pete [Eddie McClintock] is on desk duty following his artifact-induced bout of delusions and paranoia from last week.

With Pete grounded until further notice, Artie sends Claudia [Allison Scagliotti] off with Myka to sort out what’s going on on campus, while he awaits the arrival of Dr. Vanessa Calder and the removal of his new appendix.

While there are always unexpected events in any W13 ep, For the Team is awash with them. There’s Pete’s ongoing verbal jousts with get Univille’s gorgeous veterinarian; an opportunity for Pete to tease Saul; Claudia’s attempt to be Myka 2.0 in the field, and the return of H. [Helena] G. Wells [Jaime Murray] – who has a request that really comes out of left field! All that and the reappearance of Timothy Leary’s glasses! 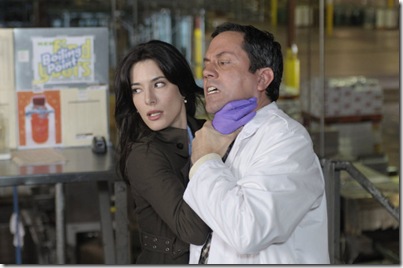 Because the screener I received doesn’t have any credits, I have no idea who wrote and directed For the Team, which is a shame. The ep is filled with primo moments of humor – Pete teasing Artie and Claudia attempting to be Myka; unexpected twists – Wells’ reason for reappearing and helping Myka and Claudia; drama – the onscreen depiction of the fate of the latest member of the wrestling team to die, and even a few moments of romance [no hints – trust me, you’ll thank me].

The humor ranges from not so gentle teasing to edgy mocking; the romance comes off as sweet – but not cloying – and the drama has real bite. The ep moves like a bullet train, yet never feels forced, or overly stuffed. All the principals are in fine form and the supporting cast – especially Murray – is superb.

Because of the nifty bits of unexpected intrigue – and a few moments of inexpressible loss [courtesy of Ms. Murray] – For the Team is one of the most substantial episodes of Warehouse 13, so far. W13 may be a light, fluffy summer series, but that doesn’t mean it can’t, occasionally, surprise with its depth.