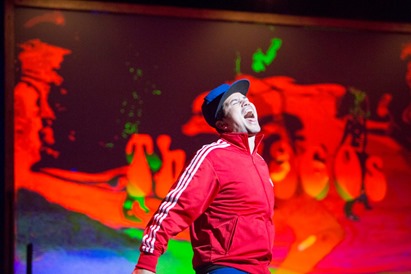 John Leguizamo pours more of himself into his HBO Specials than almost anyone else. The result is often hilarious, frequently harrowing but always amazing.

Leguizamo brings his latest special, the Drama Desk Award-winning one-man show, Ghetto Klown, to HBO on Saturday, March 22nd (10/9C). It’s a great reason to stay on and turn on the tube. Check out the trailer and press release after the jump.

An HBO favorite returns for his fifth solo special on the network when JOHN LEGUIZAMO’S GHETTO KLOWN debuts SATURDAY, MARCH 22 (10:00-11:45 p.m. ET/PT). Adapting his Drama Desk Award-winning one-man stage show, the special leads the audience on a hilarious and touching roller-coaster ride through the highs and lows of Leguizamo’s personal and professional life, featuring vivid accounts of the colorful characters that have populated his story.

Written by Leguizamo, GHETTO KLOWN is directed by Fisher Stevens, who directed the Broadway production and national tour.

GHETTO KLOWN was taped last November at the New Jersey Performing Arts Center in Newark. Leguizamo tells audiences that the show is like therapy and spins a “cautionary tale” that begins with childhood memories, continues through the early days of his acting career, and arrives on the sets of well-known TV series and major motion pictures, while addressing his recurring feelings of self-doubt, negativity and depression.

Leguizamo will soon be seen in John Favreau’s “Chef,” which debuts at SXSW in March, and recently appeared in the hit feature film “Ride Along,” starring alongside Ice Cube and Kevin Hart. He also just completed production on “Cymbeline,” a modern-day take on Shakespeare’s play, and “Stealing Cars,” starring with William H. Macy. Leguizamo’s other film credits include “Walking with Dinosaurs,” “The Counselor,” “Kick-Ass 2,” “Love in the Vanishing on 7th Street,” “The Lincoln Lawyer,” the “Ice Age” franchise, “The Happening,” “Summer of Sam,” “King of the Jungle,” “Spawn,” “William Shakespeare’s Romeo + Juliet,” “Dr. Dolittle,” “Carlito’s Way” and “Casualties of War.”