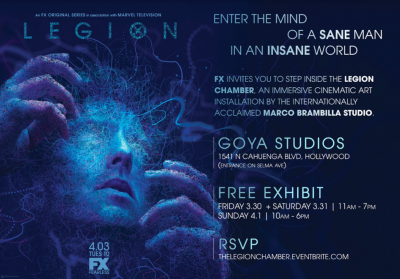 FX Networks today announced the arrival of The LEGION Chamber, an artistic video installation inspired by the FX drama series Legion which allows fans to step inside a 360-degree micro-theatre featuring a one-of-a-kind presentation by the internationally-acclaimed Marco Brambilla Studio.

This extraordinary visual art piece will take fans on a surreal journey through David’s altered states of reality, from March 30-April 1, at Goya Studios in Hollywood.

Season 2 of the Acclaimed Series from Creator and Executive Producer Noah Hawley Returns to FX on Tuesday, April 3 at 10 PM ET/PT

LOS ANGELES, CA (March 26, 2018) – FX Networks today announced the arrival of The LEGION Chamber, an artistic video installation inspired by the FX drama series Legion which allows fans to step inside a 360-degree micro-theatre featuring a one-of-a-kind presentation by the internationally-acclaimed Marco Brambilla Studio. Once inside, participants will find themselves disconnected from the outside world – literally – and fully entrenched in the hypnotic digital realm of Legion’s David Haller. Hosted at Goya Studios in Hollywood March 30 – April 1, this extraordinary visual art piece will take fans on a surreal journey through David’s altered states of reality forcing them to question what is real and what is not. Legion, the acclaimed drama series from creator and executive producer Noah Hawley, will return to FX on Tuesday, April 3 at 10 PM ET/PT.

“Our aim was to create an experience that would take the viewer through multiple levels of Haller’s altered states of schizophrenic consciousness,” artist Marco Brambilla said. “A flood of moments, thoughts, and memories are reflected into fragmented mirrored surfaces, these kaleidoscopic reflections completely surround us and we have the sense of assuming the characters’ psychological POV. I produced ‘Fracture’ with THE MILL, the world-renowned Visual Effects & Design Company with whom I’ve worked with many times before. Working together, we were able to achieve start-of-the-art production values for this immersive experience.”

On working with Brambilla, Kenya Hardaway, SVP of Integrated Promotions at FX said, “We are excited to have Marco Brambilla’s amazing artistic piece, FRACTURE, to share with fans of Legion. As admirers of his works, we believed his innovative style could present a new perspective on David Haller’s world. FRACTURE, does just that – captivating the audience through a marvelous visual display.”

The LEGION Chamber hours and location details are below:

For more information on how to experience The LEGION Chamber, go to facebook.com/legionfx.

Based on the Marvel Comics by Chris Claremont and Bill Sienkiewicz, Legion is the story of “David Haller” (Dan Stevens), a man who believed himself to be schizophrenic only to discover that he may actually be the most powerful mutant the world has ever seen.

From childhood, David shuffled from one psychiatric institution to the next until, in his early 30s, he met and fell in love with a beautiful and troubled fellow patient named “Syd” (Rachel Keller). After Syd and David shared a startling encounter, he was forced to confront the shocking possibility that the voices he hears and the visions he sees may actually be real. Syd led David to “Melanie Bird” (Jean Smart), a demanding but nurturing therapist who heads a team of specialists – “Ptonomy” (Jeremie Harris), “Kerry” (Amber Midthunder) and “Cary” (Bill Irwin) – each of whom possesses a unique and extraordinary gift. Together, they helped David to recognize and harness his hidden powers. With their support, David finally unlocked a deeply suppressed truth – he had been haunted his entire life by a malicious parasite of unimaginable power. Known as the “Shadow King,” this malevolent creature appeared in the form of David’s friend “Lenny” (Aubrey Plaza), but is actually an ancient being named “Amahl Farouk.” In an epic showdown, David and his friends battled his demon, ultimately forcing it from David’s body. Unfortunately, Farouk found a new host – Melanie’s husband “Oliver Bird” (Jemaine Clement) – and escaped. Just when they thought they’d earned a moment of respite, a mysterious orb appeared and took David away to an unknown place. With David and Oliver missing and Farouk on the loose, the team forms an unlikely alliance with their former enemy “Clark” (Hamish Linklater) and his well-funded government organization, Division III. Meanwhile, Amahl Farouk (Navid Negahban) is on a new path to attaining infinite and world-ending power.

Noah Hawley serves as Executive Producer, along with John Cameron, Lauren Shuler Donner, Simon Kinberg, Jeph Loeb and Jim Chory. Legion is the latest project from Hawley and Cameron, two of the executive producers of the Emmy® and Golden Globe®-winning FX anthology series Fargo. Legion is produced by FX Productions and Marvel Television, with FXP handling the physical production.

ABOUT MARCO BRAMBILLA STUDIO
Founded in 2012, Marco Brambilla Studio is a digital and experiential art studio, based in New York and London. They are widely known for their visionary use of new technologies to create elaborate multi-sensory experiences, combining video, sound, light, architecture, and interaction. With Fracture, the immersive film created for this exhibit, Brambilla explores the concept of altered reality, a central theme of LEGION.

ABOUT MARVEL ENTERTAINMENT AND MARVEL TELEVISION
Marvel Entertainment, LLC, a wholly-owned subsidiary of The Walt Disney Company (NYSE: DIS), is one of the world’s most prominent character-based entertainment companies, built on a proven library of more than 8,000 characters featured in a variety of media over seventy-five years. Marvel utilizes its character franchises in entertainment, licensing and publishing.

Marvel Television develops and produces some of the world’s most creative and popular live-action and animated programming for broadcast and cable television networks plus digital platforms including a historic deal with NETFLIX. Its portfolio of self-produced series includes “Marvel’s Agents of S.H.I.E.L.D., ” ”Marvel’s The Inhumans” for ABC, ”Marvel’s Daredevil,” “Marvel’s Luke Cage,” and the Emmy and Peabody Award-winning “Marvel’s Jessica Jones” for NETFLIX and “Marvel’s Ultimate Spider-Man,” “Marvel’s Avengers” and “Marvel’s Guardians of the Galaxy” for Disney XD. Marvel Television’s upcoming projects include “Marvel’s Iron Fist” and the culminating “Marvel’s The Defenders” for NETFLIX as well as “Marvel’s The Punisher” (NETFLIX), “Marvel’s Cloak & Dagger” (Freeform), “Legion” (FX), and “Marvel’s Runaways” (Hulu). For more information, visit marvel.com. © 2017 MARVEL