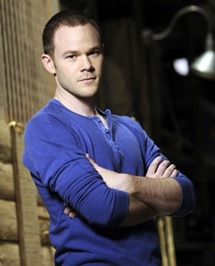 Killjoys, a co-production between Syfy, Space and Temple Street Productions, has cast Hannah John-Kamen, Aaron Ashmore and Luke Macfarlane for the space opera that revolves around three fun-loving, hard-living bounty hunters in a distant system on the brink of war.

The series comes from the producers of Orphan Black and the creator of Lost Girl. That suggests an intriguing mix of elements – and a series that will probably begin by jumping into the deep end (remember the premiere of Lost Girl?).

Production begins on the 10-episode, one-hour series on August 5th with the series premiere in 2015.

NEW YORK – July 22, 2014 – Syfy, Space and Temple Street Productions announced today that Hannah John-Kamen, who starred in the West End musical Viva Forever, Aaron Ashmore, who played Steve Jinks on the long-running Warehouse 13, and Luke Macfarlane, who portrayed Scotty Wandell in the popular Brothers and Sisters, have been cast as the leads in the upcoming original space adventure drama series Killjoys.

From Temple Street Productions, the producers of Orphan Black, and Michelle Lovretta, the creator of Lost Girl who will serve as writer and showrunner, Killjoys follows a fun-loving, hard living trio of interplanetary bounty hunters sworn to remain impartial as they chase deadly warrants throughout the Quad, a distant system on the brink of a bloody, multi-planetary class war. Chris Grismer (Vampire Diaries) will direct the pilot and additional episodes.

Commissioned by Space and produced by Temple Street Productions for Space and Syfy, the 10-episode, one-hour series will begin production in Toronto on August 5. Killjoys will premiere on Syfy and Space in 2015.

In Killjoys, Hannah John-Kamen stars as the gorgeous, complicated, and deadly Dutch. A top-level Killjoy, she’s a much loved and charming presence in her community, with a unique gift for earning people’s trust and respect regardless of their class. Under her banter and protective flirtations, there is pain, maturity, and a deep solemnity resulting from a dark secret past.

Aaron Ashmore takes on the role of John Jaqobis, a peacemaker who hates conflict. Cheerful and kind-hearted, John prefers not to fight, but his sarcastic wit has put him into the fray enough over the years to teach him how to do it well, and dirty.

Luke Macfarlane stars as D’avin, a handsome, rugged, sarcastic, and incredibly loyal former soldier. He dreamed of enlisting in the military since boyhood, and his hard-won expertise in tactics, maneuvers and hand-to-hand combat make him an instant asset to the Killjoy team.

“Hannah, Aaron and Luke are the perfect combination to lead this exciting new drama series,” said Corrie Coe, Senior Vice President, Independent Production, Bell Media. “With only two weeks remaining until the start of production, we look forward to seeing the universe this trio will bring to life with our stellar partners, Temple Street Productions and Syfy.”

“We’re absolutely thrilled to have Hannah, Aaron and Luke sign on to play our stalwart team of bounty hunters,” commented Ivan Schneeberg and David Fortier, Executive Producers and Co-Presidents of Temple Street Productions. “We’re looking forward to getting production underway with this killer ensemble and our partners Space and Syfy.”

Bell Media has commissioned some of Canada’s most-watched and most-acclaimed original programming, working with the best Canadian independent producers in the country. Hit CTV series include ratings success stories SAVING HOPE, THE LISTENER, MOTIVE, and THE AMAZING RACE CANADA, the record-breaking, Canadian-produced complementary version of the hit international series. New to CTV in 2014 are hit international format MASTERCHEF CANADA and multi-cam office comedy SPUN OUT, one of the most-watched new comedies of the season. Among the scripted series on Bell Media pay and specialty channels are the two-time Emmy®-nominated hit DEGRASSI, the internationally acclaimed ORPHAN BLACK, the most-watched original series in Space history BITTEN, Bravo’s most-watched new drama 19-2, TRANSPORTER: THE SERIES, and upcoming dramas SENSITIVE SKIN, and KILLJOYS. Bell Media specialty channels are also home to hit factual series HIGHWAY THRU HELL and CANADA’S WORST DRIVER, among others. In 2013, Bell Media ordered 27 original Canadian series and currently has 84 projects in various stages of development.

Space is home to phenomenal programming including imaginative dramas, epic movies, engaging reality series, and the daily entertainment talk show INNERSPACE, the source for all-things genre – all in high definition (HD). Named “Channel of the Year” in 2013 by Playback Magazine, Space is also home to Original Series ORPHAN BLACK and BITTEN. Space content is always available at Space.ca, and on Facebook, @SpaceChannel, and other social media platforms. Space is a division of Bell Media, which is owned by BCE Inc. (TSX, NYSE: BCE), Canada’s largest communications company.