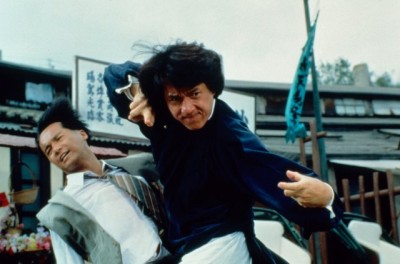 AMC is turning late night Friday into a martial arts zone with Kung Fu Fridays setting a series of iconic martial arts films to lead into the November premiere of its action drama The Badlands.

Titles like The Legend of the Drunken Master, Jackie Chan’s Project A and Tiger Cage  are only the beginning of the mayhem that will explode on your screens beginning Friday, September 18th (1:06 am ET/12:06 C).

Follow the jump for details and see if your kung fu is strong. The Badlands premieres on Sunday, November 15th (10/9C)

In anticipation of the launch of AMC’s newest scripted series, “Into The Badlands”, the network will kick off of “Kung Fu Fridays,” a late night marathon of iconic martial arts films. Latenight Fridays leading into the series premiere in November, viewers can set their DVR and catch up on iconic martial arts films including “The Legend of the Drunken Master,” “Jackie Chan’s Project A,” “Tiger Cage” and many more.

On Sunday, November 15th at 10pm ET/PT AMC will premiere “Into the Badlands,” which tells the story of a ruthless, well-trained warrior named Sunny (Daniel Wu) and a young boy named M.K. (Aramis Knight) who embark on a spiritual journey across a dangerous land controlled by feudal barons. From AMC Studios, the six-part series is created by executive producers/showrunners/writers Alfred Gough and Miles Millar (Shanghai Noon, “Smallville”), and executive produced by Oscar®-nominated producers Stacey Sher and Michael Shamberg (Pulp Fiction, Contagion), director David Dobkin (Wedding Crashers, Shanghai Nights), fight director Stephen Fung (Tai Chi Zero, House of Fury) and Daniel Wu (Tai Chi Zero).  “Into the Badlands” also stars Marton Csokas (The Lord of the Rings: The Return of the King) as Quinn; Oliver Stark (“Luther”) as Ryder; Emily Beecham (28 Weeks Later) as Widow; Orla Brady (“Dr. Who,” “Fringe”) as Lydia; Sarah Bolger (“Once Upon a Time,” “The Tudors”) as Jade; Ally Ioannides (“Parenthood”) as Tilda; and Madeleine Mantock(Edge of Tomorrow) as Veil.

Legend of the Fist: The Return of Chen Zhen at 1:06AM ET/PT

Seven years after the apparent death of Chen Zhen, who was shot after discovering who was responsible for his teacher’s death (Huo Yuanjia) in Japanese-occupied Shanghai. A mysterious stranger arrives from overseas and befriends a local mafia boss. That man is a disguised Chen Zhen, who intends to infiltrate the mob when they form an alliance with the Japanese. Disguising himself as a caped fighter by night, Chen intends to take out everyone involved as well as get his hands on an assassination list prepared by the Japanese.

Dragons Forever at 3:36AM ET/PT

Starring Bin Won and Sae-ron Kim, a quiet pawnshop keeper with a violent past takes on a drug- and organ trafficking ring in hope of saving the child who is his only friend.

Starring Yun-Fat Chow and Wen Jiang, the film is set in 1920s China where a bandit arrives in a remote provincial town posing as its new mayor, where he faces off against a tyrannical local nobleman.

Visit AMC.com for the full October and November schedule of “Kung Fu Fridays”.

Whether commemorating favorite films from every genre and decade, or creating acclaimed original programming, AMC brings to its audience something deeper, something richer, Something More. The network reigns as the only cable network in history ever to win the Emmy® Award for Outstanding Drama Series four years in a row with “Mad Men,” and six of the last seven with current back-to-back honoree, “Breaking Bad.” The network boasts the most-watched drama series in basic cable history and the number one show on television among adults 18-49 for the last three years with “The Walking Dead.” AMC’s current original drama series include “Mad Men,” “The Walking Dead,” “Better Call Saul,” “Hell on Wheels,” “TURN: Washington’s Spies,” “Halt and Catch Fire,” “Humans,” “Fear the Walking Dead,” and the forthcoming “Into the Badlands,” “The Night Manager,” “Broke” and “Preacher.” AMC also explores authentic worlds and discussion with original shows like “Talking Dead,” “The Making of The Mob,” “Comic Book Men” and the upcoming “The West.” AMC is owned and operated by AMC Networks Inc. and its sister networks include IFC, SundanceTV, BBC America and WE tv. AMC is available across all platforms, including on-air, online, on demand and mobile. AMC: Something More.