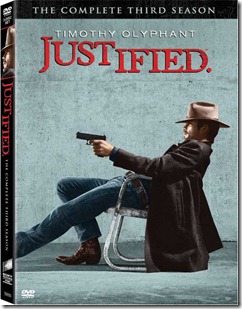 Season three of Justified introduced Robert Quarles (Neil McDonough), a smiling, blond stack of twisted nasty fresh from the Detroit mob who rolls into Harlan County looking to show the yokels how organized crime is done, son! We also meet Ellstin Limehouse (Mykelti Williamson), the unofficial but very definite leader of the good folks of Noble’s Holler – African-Americans whose ancestors, freed slaves, were deeded the land after the Civil War.

At the same time, Deputy U.S. Marshal Raylan Givens (Timothy Olyphant) is more than a little of his game while he recovers from a wound inflicted during the shootout that ended season two – which puts him in the uncomfortable position of having to deal with a killer he might have apprehended if he had bothered to look at a file given him by colleague Tim Gutterson (Jacob Pitts). In a related arc, we learn that Raylan’s boss, Art (Nick Searcy) might actually understand Raylan more than we previously knew).

Since the end of season two, Raylan has moved in with his ex-wife, Winona (Natalie Zea), who is pregnant with his baby. Boyd Crowder (Walton Goggins) has deepened his relationship with Ava (Joelle Carter) and beginning to make his play for head of illicit activity in Harlan – starting with devious plan to find and obtain the millions left behind by Mags Bennett (which brings sole remaining Bennett, Dickie – finely played by Jeremy Davies – back into the picture).

Some of the more interesting character arcs find Raylan’s morals-free dad, Arlo (Raymond J. Barry) becoming like a father to Boyd (the son he wished he’d had); Quarles’ plans to take over the drug business in Harlan County (which has the fringe benefit of bringing Jere Burns’ Wynn Duffy back into play), and Limehouse working to keep Noble’s Holler safe (partly by making things difficult for others).

Some of the themes explored in Justified’s third season include family (the one you’re born into; the one you choose), the idea of home – lost, found, defended (Quarles’ displacement from Detroit; Arlo’s becoming family to Boyd; Limehouse working to keep his holler safe from invading, destructive white folks), and crossing lines (particularly in regard to Raylan, Art and, especially, Ava).

By bringing in two major new characters, Justified’s writers move the series from the examination of an internal dynamic in season two, to a three-way us vs. them kind of scenario. The danger comes from both within and without and is, thereby, able to provide the writers with ample opportunity to bring new shades to all of the show’s characters.

The interplay between characters – and especially Olyphant’s Raylan and Goggins’ Boyd – is so wonderful that the series would be just as entertaining without the fights and shootouts, but they do make for some entertaining variations.

The entire cast is uniformly outstanding; the writing mostly brilliant and the series moves like an Elmore Leonard novel – which is to say, like a bat out of hell. Season three is the best season yet – and that’s saying something.

The DVD set includes making of and anatomy of a stunt featurettes, outtakes, deleted and nine extremely good commentary tracks.