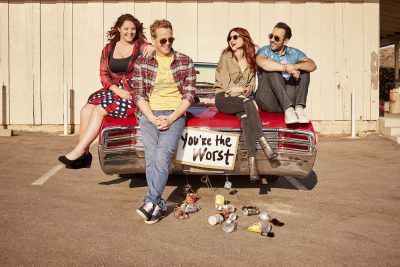 LOS ANGELES, November 5, 2018 – It’s time to raise a cup of trash juice and toast farewell to FXX’s critically acclaimed, anti-romantic comedy, You’re the Worst. The fifth and final season of You’re the Worst will premiere on Wednesday, January 9 at 10 p.m. ET/PT on FXX, it was announced today by Chuck Saftler, President, Program Strategy and COO, FX Networks.

You’re the Worst is a modern look at love and happiness told through the eyes of two people who haven’t been very successful with either. It’s the story of Gretchen and Jimmy, fear, heartbreak, romance, sex, food, Los Angeles, Sunday Funday, friendship, and the fact that sometimes the worst people make the best partners. An original comedy from writer and executive producer Stephen Falk, You’re the Worst puts a dark twist on the romantic comedy genre.

Narcissistic, brash, and stubborn “Jimmy Shive-Overly” (Chris Geere) has inadvertently found himself paired up with cynical, people-pleasing, and self-destructive “Gretchen Cutler” (Aya Cash). After a whirlwind courtship, and a very rough post-cohabitation period of dealing with Gretchen’s clinical depression, Jimmy and Gretchen were forced to learn how to manage a relationship in the face of tragedy when Jimmy’s father unexpectedly died. Ultimately drawn closer, Jimmy proposed and then suddenly disappeared when confronted with the notion that Gretchen would be his family. After a prolonged period of separation, Jimmy and Gretchen are in it for the long haul now… at least they think they are. Maybe.

Rounding out the cast is Desmin Borges, who plays “Edgar Quintero,” Jimmy’s once homeless war veteran roommate who, having recently learned to manage his PTSD, is now firmly entrenched in the world of television comedy writing; and Kether Donohue as “Lindsay Jillian,” Gretchen’s best friend and former partner in crime who, after conquering the corporate world, finds herself yearning for love again.

You’re the Worst was nominated for a Critics’ Choice Television Award for “Best Comedy Series” in 2015 and 2016, and the series earned a TCA Award nomination for “Outstanding Achievement in Comedy” in 2016. In 2017, costumes and props from the series were featured as part of a curated exhibition in The Museum of Broken Relationships in Los Angeles.