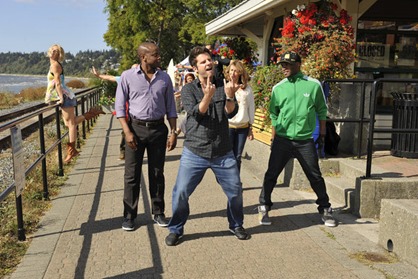 On Sunday, December 15, USA Network’s hit series PSYCH presents a spectacular two-hour musical special, PSYCH THE MUSICAL. Fans have been waiting years for this musical extravaganza that will have everyone’s favorite faux psychic, his best friend and the Santa Barbara Police Department’s finest all kicking up their heels and singing 14 original songs.

In the special, Shawn (James Roday) and Gus (Dulé Hill) dive into a world that’s equal parts mystery and melody.  The duo must track down playwright and mad man, Z (guest star Anthony Rapp, “Rent”), who six years earlier was deemed criminally insane after trapping a critic in the theater and burning it to the ground.  With little to go on, they are forced to consult with the one person Z confided in while institutionalized — a dangerous and familiar villain from Shawn’s past.  Their informant uses songs and cryptic clues to reveal Z’s next steps.

PSYCH creator/executive producer Steve Franks wrote and directed PSYCH THE MUSICAL, and along with music composer Adam Cohen, co-wrote the 14 original songs and reprises.  The music and lyrics were recorded in part on the iconic Sinatra stage at Capital Records in Los Angeles. In addition to Rapp, guest stars include Ally Sheedy (“The Breakfast Club”) who returns as the infamous Mr. Yang, Tony Award Winner Barry Bostwick (“Cougar Town”), Brooke Lyons (“2 Broke Girls”) and Jimmi Simpson (“It’s Always Sunny in Philadelphia”) plus Kurt Fuller (“Midnight in Paris”) who recurs as Woody the coroner.

Below is a full list of the songs featured in the episode:

PSYCH THE MUSICAL is written and directed by Steve Franks, who executive produces with Kelly Kulchak and Chris Henze and is from Universal Cable Productions in association with Tagline Pictures.

Photo by Alan Zenuk/Courtesy of US Network