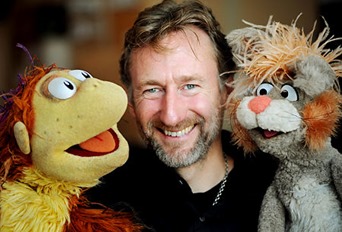 An eight-episode first season has been greenlit. No premiere date has been set, as yet.

NEW YORK – October 8, 2013 – Syfy greenlights an eight episode order for Jim Henson’s Creature Shop Challenge (working title), a competition series featuring ten aspiring creature creators competing to out-imagine one another in a series of challenges where they will build everything from mechanical characters to whimsical beasts, bringing high-end inanimate creature designs to life.   The contestants compete for $100,000 and the opportunity for the job of a lifetime – a contract working at the world-renowned Jim Henson’s Creature Shop™.  The announcement was made today by Mark Stern, President of Original Content, Syfy.

Brian Henson serves as lead judge on the series. Henson is the Chairman of The Jim Henson Company and the Creature Shop.  An award-winning writer, director and producer, he is also a creature designer and performer taught by the master, his father Jim Henson.  His long resume in movies and television includes iconic roles like Hoggle in the fantasy classic Labyrinth and the dog in the groundbreaking anthology series The Storyteller.  Henson has also produced and directed such television projects as Farscape, Muppets Tonight and Dinosaurs.  His film directing credits include The Muppet Christmas Carol and Muppet Treasure Island.  Henson was part of the team that first created and utilized the Henson Performance Control System, a powerful custom-based interface for puppeteers, which won an Academy of Motion Pictures Arts and Sciences (Scientific and Engineering) Award in 1992.  He also led the Shop’s work in creating the revolutionary digital puppeteering technology, the Emmy Award-winning Henson Digital Puppetry Studio.

"As Face Off does with SFX makeup application, Jim Henson’s Creature Shop Challenge showcases the incredible imagination and artistry of lifelike creature construction,” said Stern.  “We are honored to partner with The Jim Henson Company and Brian Henson on this series.  The Creature Shop has set the bar for a caliber of work that is unmatched in quality, design and sheer imagination."

Serving as mentors on the series will be world-renowned designer Peter Brooke, mechanization and animatronics master John Criswell and fabrication and artistic specialist Julie Zobel. The three are longtime Creature Shop artists who have dedicated their talents to the Henson legacy. Their tenures with The Jim Henson Company span decades and they bring a specialized knowledge having collaborated directly with Jim Henson himself.  Working alongside the creature creators inside their workplace at the Creature Shop, they will be available for consultation and hands-on assistance.

The creative challenges in the series will showcase the fascinating process behind creature building, from conceptual design to sculpting, fabricating and mechanization. Each episode will end with on-set performances involving the elaborate and life-like creations.  The creature creators will be tasked to create everything from hand puppets to large-scale theatrical creatures that can master the balance between realism and fantasy.

Jim Henson’s Creature Shop Challenge is a production of The Jim Henson Company.  Brian Henson will executive produce with his sister Lisa Henson, the company’s CEO.  In addition to her time at The Jim Henson Company, Lisa’s prolific career in entertainment includes serving as president for Columbia Pictures where she oversaw films like Men In Black and The People vs. Larry Flint.  Before that, she was a production executive at Warner Bros. where she worked on projects like Batman and Lethal Weapon.  Lisa is currently in production on the upcoming family film Alexander and the Terrible, Horrible, No Good, Very Bad Day starring Steve Carell and Jennifer Garner.

Jim Henson’s Creature Shop™ provides performed digital visual effects, animatronic creatures, animation and soft puppets to the international film, television and advertising industries. Based in Los Angeles and New York with satellite shop capabilities internationally, the Shop is known for designing and building some of the world’s best-known characters including the Sesame Street puppets, the classic Muppets, the dinosaurs from Dinosaurs, the aliens from Farscape and the fantastical creatures from The Dark Crystal and Labyrinth. Other features credits include Where the Wild Things Are, Forgetting Sarah Marshall, Hitchhiker’s Guide to the Galaxy, and Five Children and It. The shop is also known for its live performance work with artists like Cee Lo Green, Kanye West, Lady Gaga and Deadmau5. A recipient of more than 9 Emmy AwardsÒ for its outstanding work building puppets for Sesame Street, the Shop also received an Academy Award for its visual effects work on the film Babe. Other awards include a Scientific and Engineering Academy AwardÒ for the Henson Performance Control System, a powerful custom-based interface for puppeteers, and an Emmy Award for its work in developing the Henson Digital Performance Studio, a patented control system technology that enables puppeteers to physically perform a computer generated (CG) character in real time.

The Jim Henson Company has remained an established leader in family entertainment for over 50 years and is recognized worldwide as an innovator in puppetry, animatronics and digital animation. Best known as creators of the world famous Muppets, Henson has received over 50 Emmy Awards and nine Grammy Awards. Recent credits include the Emmy® nominated Sid the Science Kid, Dinosaur Train, and Pajanimals as well as the new series Doozers, a CG animated preschool series. Features include The Dark Crystal, Labyrinth, MirrorMask, and the upcoming Alexander and the Terrible Horrible No Good Very Bad Day and television productions include Fraggle Rock and the sci-fi cult series Farscape.

With additional locations in New York and London, The Jim Henson Company is headquartered in Los Angeles on the historic Charlie Chaplin lot, complete with soundstage and postproduction facilities.  Independently owned and operated by the five adult children of founder Jim Henson, the Company is also home to Jim Henson’s Creature Shop™, a pre-eminent character-building and visual effects group with international film, television, theme park and advertising clients, as well as Henson Recording Studios, one of the music industry’s top recording facilities known for its world-class blend of state-of-the-art and vintage equipment. The Company’s Henson Alternative brand is currently touring “Puppet-Up! – Uncensored,” a live puppet improvisational show.