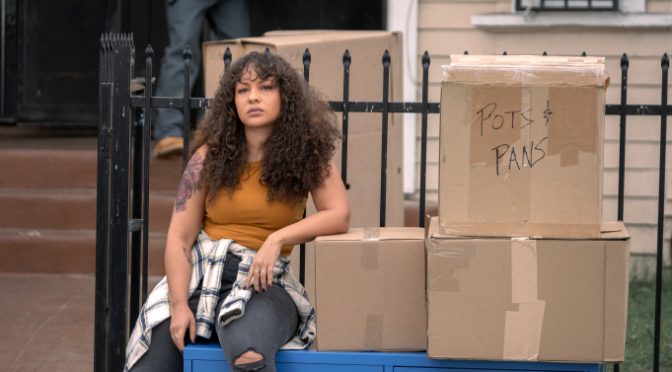 BLINDSPOTTING picks up six months after the film and centers on Ashley, who is nipping at the heels of a middle-class life in Oakland until Miles, her partner of 12 years and father of their son, is suddenly incarcerated, leaving her to navigate a chaotic and humorous existential crisis when she is forced to move in with Miles’ mother and half-sister.

In my series of interviews for the series, I first sat with Jasmine Cephas Jones who plays Ashley in both the 2018 movie and is now the focal point of the series!

What was your reaction to finding out that Ashley would be brought to the center of the story for a TV series?

I was very very excited. You know, I found out a couple of years ago. You know this journey to what Blindspotting is now has been a longtime coming. There are so many conversations and drafts. To be able to be sitting with you and talking about this now, this season finale on Sunday is just absolutely unreal. I think the best part about all of this is sitting with my friends and all having a dream and wanting to work with each other and believing in each other. This has all happened because Rafeal and Daveed & their trust in me. I have so much trust in them. It’s just been a beautiful process. So, here we are, its very dreamlike.

Over the course of the series, we see Ashley moving in with Miles’ mother Rainey played by Helen Hunt. What do you find most interesting and challenging and complicated about that relationship between Ashley and Rainey and what was it like working with Helen?

I think the most complicated thing about the relationship is how they treat each other now. You know there is a generational gap between them and Ashley has worked so hard to create this bubble in this family and runaway from the past of who she was. And now she has entered this home without her other half, basically with her mother in law, she’s living under her roof. Rainey doesn’t want to overstep but still wants to have her say and keep her grounded in how she wants to raise her child. Rainey also has to deal with “How do I still be the mom of the house and not overstep Ashley in what she wants?” So that’s the constant tear and struggle and constant in between those two but again, it’s all love there that they have for each other that its just working on how to treat each other properly and I have to work slowly through that each episode.
As far as working with Helen Hunt, she was kind of the mother figure of the show. She has done so many things and she’s not just an actress. She’s directed before, she’s produced before. She’s written before. You can see that in how she’s handled the set. She respects us so much. She loves us so much and we do her but it’s been such a delight to work with an actor as good as Helen Hunt. It’s also loving and caring.

The series also had you set to serve as producer for the season, awarding her a first producing credit. What were some of the challenges you had to face as a first-time producer?

It wasn’t really so much of the challenges, it was understanding everything that goes on behind the scenes. And so it was the first time that I have been part of that conversation. I was able to be in those rooms, be in those discussions. It wasn’t much of a challenge being more open and having that learning experience for me. It’s understanding how things work and not just from the actor’s point of view and how to make a show. You know, what goes into that and there’s all these other decisions that you just don’t think about as an actor and how do people get picked and all of this stuff. Being on the other side, it’s so eye opening. The best part about it was more creatively of how much I have a say about Ashley and how to navigate that. I have control of that. It was heard and validated in a way that I never experienced before.

What were your favorite moments of Season 1?

So many, I mean trashy the hotel room. Going through a drug crazed trip with the amazingly talented ladies. Seeing Benjamin Earl Turner killing it in the season finale. Have you seen it yet or….
Yes I have, I am blown away since I have seen the film before watching the series. I love that its not a great series.
I am just so proud of the art that’s been made and how we translated into TV. I have never seen anything like this before. Its such a creative way to make people laugh but also shed a light onto serious issues and to be able to seamlessly do that in twenty five minutes of an episode is so challenging but I feel we handled it really well.

Stay Tuned for our second and final part of the Blindspotting interviews as we talk to Jaylen Barron (Trish), Benjamin Earl Turner (Earl)& Candace Nicholas-Lippman coming up…… Catch the Season Finale this Sunday at 9:00pm ET/PT on STARZ